As Eclipse Watchers Look to the Sky, a New Age of Telescopes Is Dawning

By Jeffrey Kluger and TIME Video

It’s impossible to know how many amateur telescopes will be trained upward as the Great American Eclipse makes its stunning way across the continental U.S. on Aug. 21. That explosion of private skywatching telescopes will occur at a moment when the professional kind — conducted with massive ground-based observatories and their counterparts in space — is going through boom times of its own.

Currently, there are more than three dozen orbiting telescopes at work, observing the cosmos in multiple wavelengths, including the visible, ultraviolet, x-ray and gamma ray. And there are many dozens more on Earth. Both on the ground and in space, more observatories still are coming along all the time.

The new hot spot for ground-based observatories is the Atacama Desert in Chile, where countries from around the world are flocking to take advantage of the area’s high altitude and extreme dryness, which together make for an almost perfectly clear window on the skies. The most intriguing of the Atacama telescopes include the Cosmic Background Imager, a surreal-looking cluster of 13 detectors perched at an elevation of 16,700 ft., designed to study the energetic crackle that still echoes through the cosmos in the wake of the Big Bang. There are also the Atacama Cosmology Telescope, a multi-national instrument, designed to observe the universe in microwave frequencies; and the Atacama Submillimeter Array Telescope, a Japanese observatory with the ability to study both distant galaxies and the center of our own galaxy.

Among the space-based telescopes, the 800-lb. gorilla is, of course, the Hubble — but Hubble is also a very old gorilla, having been in space since 1990. Help is on the way, however, especially in the form of the James Webb Space Telescope, which will be launched in 2018.

Webb will be an upgrade over Hubble in almost every way — from its 21-ft. diameter mirror, which dwarfs Hubble’s 8-ft. model, to its ability to do most of its observing in infrared, meaning it can peer straight through the clouds of interstellar dust that often obscure Hubble’s view. With that ability, Webb can see light that’s been streaming to us for the past 13.6 billion years, or 98.5% of the way back to the Big Bang.

Even before Webb flies, NASA will launch the Transiting Exoplanet Survey Satellite, which will look for exoplanets around the half-million stars closest to Earth. Sometime after that should come the Wide-Field Infrared Survey Telescope which, among other things, will investigate dark energy, the still-mysterious force that is forever pulling and expanding the universe.

None of this diminishes the joy experienced by backyard astronomers making observations without the help of the pros — and that joy will be compounded exponentially in August. Space puts on a full-time show, and we never run out of ways — both big and small — to enjoy it. 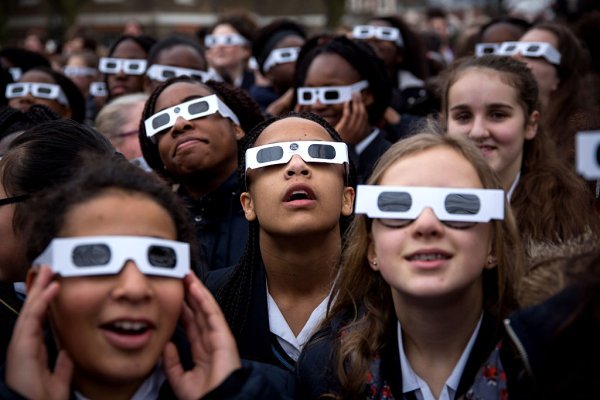 How Everyone in the U.S. Could Witness the Total Solar Eclipse in Person
Next Up: Editor's Pick