How Princess Diana Created a New Era of Celebrity

It’s been twenty years since the sudden death of Princess Diana. The violence of her death, as she was killed in a car crash while her driver attempted to evade the paparazzi, still haunts. But the way she lived was far more impactful. Diana’s vibrant and amply covered public life helped prime media consumers the world over for a more expansive and personally relatable celebrity culture. As a star, Diana was the first to merge the natural intrigue of royalty with the cleverness and panache of Hollywood. She remains, two decades after her death, perhaps the most compelling practitioner of celebrity in modern history.

Her playbook consisted of breaching the walls of celebrity with a frank, intimate air and then retreating back to a studied sort of privacy. It’s since been adapted by Angelina Jolie and Taylor Swift, among others. But entertainment-industry stars are only as interesting as their last projects and have to take part in the crassness of selling. Like Grace Kelly before her, Diana’s lifetime project was being a part of a system, the monarchy, whose intrigue is practically primal. She didn’t need to sell anything. Diana’s modern-day analogue, Catherine, Duchess of Cambridge, is relatable enough that post-marriage she’s still thought of, near-universally, as “Kate Middleton.” And yet she hasn’t sought the spotlight outside of clearly delineated royal duties — maybe because she knows better.

Diana’s wedding to Prince Charles, an event viewed by 750 million people, was an attempt to establish the newest royal’s image before she embarked on a productive public life defined by do-gooding appearances and general, vague inspiration. But in footage from that day, Diana the person barely registers. She appears dwarfed by her own extravagant gown, to say nothing of the finery around her. The elaborately-staged event commanded viewers’ attention even though the couple at its center were both ciphers. (Humanity snuck through very briefly when Diana transposed her fiancé’s many names, calling him “Philip Charles Arthur George.” Even accidentally, the woman meant to be a simple vessel for the hopes of England let slip the possibility that she was fallible.)

The wedding began a life in public that seemed at times like a somewhat violent reaction to the 25-foot-train and the staged kiss on the balcony. People who are interested in the British monarchy are generally attracted to the almost surreal commitment to decorum. Restraint at that level is fascinating in part because it tends to grow less and less familiar by the year. Unlike her husband and the rest of her family, though, Diana had a gift for communicating something other than duty. Through entanglements with the press most memorably described in Tina Brown’s authoritative biography, The Diana Chronicles, Diana fought to be seen as something other than just the wife of the future king.

Lady Diana Spencer arrives at St. Paul's Cathedral on her wedding day, revealing to the world the wedding dress which had been carefully guarded during its design.
Bettmann—Bettmann Archive

Even during her 15-year-long marriage, Diana had been an unusually seductive star — with her confessions actually living up to their breathless framing as material the public had never meant to hear. (As in the case of taped private conversations that surfaced, the public really wasn’t.) Movie stars and musicians, after all, do interviews to make money, and politicians do them to win votes. Royals don’t, or didn’t, do them at all — and certainly would never confess to the sort of hardship Diana admitted.

Her interview on the British show Panorama functioned as a coming-out of sorts for Diana speaking publicly of her own accord. During the broadcast, the princess, unable to hide her grief over the breakdown of her marriage, spoke directly to camera: “When no one listens to you, or you feel no one’s listening to you, all sorts of things start to happen. For instance, you have so much pain inside yourself because you want help, but it’s the wrong help you’re asking for.” Describing the roles she was desperately trying to fulfill through a period of self-harm — “Wife, mother, Princess of Wales” — Diana’s gaze shifted to the side, as though she were reliving feelings of guilt and anguish anyone could understand. When she called the image of her as an unstable wife “a wonderful new label,” the rancor and bitterness dripped from the screen.

She was also just magnetic on camera, someone who made the act of being surveilled seem — until the extreme invasiveness of the cameras reached a tragic conclusion — like a natural state of affairs, the opportunity to communicate with a glance appearing like something she often enjoyed. Expressive and unable to hide undignified emotions like boredom or curiosity, Diana was an artist of human moments. The appellation “The People’s Princess,” most frequently applied to her after her death, never seemed quite right. She didn’t quite belong to the people; like Queen Elizabeth and the rest of her former in-laws, she was engaged in a transaction. But what she gave to the public was not regal stability but its opposite — the sort of long-running drama that keeps one company through one’s own littler, less flashy life. And what the public gave her was not consent to be governed, as the Britons notionally owe their monarchs, but something far more satisfying: The solace of being seen, being listened to, and, maybe, of being known.

In retrospect, it’s hard to think of anyone who was a more effective celebrity in the second half of the twentieth century. That’s in part because Diana, with a canny understanding of the press and a born storyteller’s flair for drama, created an ongoing, ever-heightening document of her personal drama and her reinventions. But what made her celebrity singular was that Diana had nothing to sell but her self. That was the other key to her mastery — what she asked from her audience. They didn’t need to buy an album or a movie ticket or a fashion line in order to be close to her. They might need to learn a bit about Diana’s noble-minded causes, an edifying use of fame that boosted her image even as it contributed to real change. But all they really had to do was feel with her and feel for her.

The story of the princess who finds and loses love before, after endless personal setbacks, finding herself feels truer for Diana’s own refusal or inability to convert it into art or commerce. Stardom was the end goal, and the end. 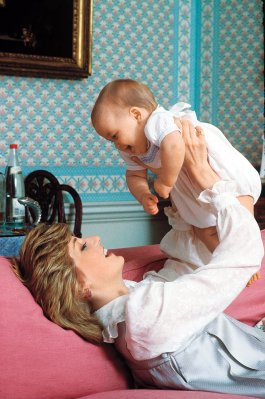 The World-Changing Evolution of Princess Diana
Next Up: Editor's Pick