The Surprising Function of the First Coloring Books

View of a young girl, filling in sketches in a coloring book, with crayon in hand, New York, 1948.
Rae Russel—Getty Images
By Merrill Fabry

Though the craze for coloring books for grown-ups has recently drawn many adults back to a hobby that had been seen as something for kids, it turns out that adult coloring books are actually how the whole concept started.

An early variation on coloring books could be the illustrations for two volumes of the very long descriptive poem Poly-Olbion by Michael Drayton, published in 1612 and 1622 (which were republished in 2016 for modern coloring-book aficionados). The illustrations were engraved maps of counties in England and Wales featuring fantastical creatures. According to art historian Anne Louise Avery, who edited the reprinting, “it became quite fashionable to hand-color it yourself,” per the Guardian, though whether aristocrats were really sitting around coloring in their maps isn’t quite certain. For example, specialist map seller Tim Bryars told Wales Online last year that, though he has seen hand-colored copies from the time, he has “never bought into the idea that people coloured them in at home on rainy Sunday afternoons.”

Whether or not coloring was a fun activity for 17th century aristocrats, it was definitely seen as useful artistic training. Outline books taught people how to use watercolors. Avery pointed to Henry Peacham’s Compleat Gentleman, from 1634, which suggests coloring maps as a way to begin learning: “I could wish you now and then, to exercise your Pen in Drawing and imitating Cards and Mappes; as also your Pencil in washing and colouring small Tables of Countries and places, which at your leasure you may in one fortnight easily learne to doe: for the practise of the hand doth speedily instruct the minde, and strongly confirme the memory beyond any thing else.”

And as the years passed, coloring only became more popular. The 60 plates of engraved flower illustrations in Robert Sayer’s The Florist, published around 1760 in London, really were specifically meant to be colored in by the owner — with emphasis on accuracy. While choosing your colors can be part of the creativity in using coloring books today, the Florist contains descriptions of the colors and instructions for how to mix the colors and paint each flower properly so they would be true to life, “for the use & amusement of Gentlemen and Ladies Delighting in that Art.” A French “marygold” is, per Sayer’s description, “Yellow, stripp’d with a deep Red: Sometimes the Whole is Red, and only ting’d with Yellow. The Stalk is ting’d with Brown. The Leaves a pale dullish Green.” The book came to popular attention earlier this year, after the St. Louis Post-Dispatch reported that Amy Pool, a curatorial assistant at the Missouri Botanical Garden, found a copy in the garden’s library. And it wasn’t the only book that was intended to be at once amusement and instruction on how to paint. Sayer also published The Compleat Drawing-Book, which had 116 engravings of things from faces with expressions, animals, birds, landscapes and more.

And, notably, these books were aimed at adults — elite adults who could afford fancy illustrated books, and who could furthermore afford to paint on them.

Though there were some books designed to teach youngsters how to paint, widespread illustrated children’s books didn’t become possible until the invention of a new printing process, lithography. First developed in Germany in the 1790s, lithography reduced the time, difficulty and cost to reproduce detailed illustrations. This increased the general population’s access to printed books, and along with changes to children’s education — the first U.S. kindergarten was started in the 1850s — encouraged the early rise of coloring books in the second half of the 19th century.

One notable example, the Little Folks’ Painting Book, came in 1879. Using line drawings by illustrator Kate Greenaway, it was published by the McLoughlin Brothers, a company that printed children’s books from the mid 1800s to early 1900s. They weren’t necessarily the absolute first in the genre, but the McLoughlin Brothers continued publishing Little Folks’ books and were key to popularizing children’s coloring books.

Then, as now, companies were keen to influence children and advertise their products wherever possible. Hood’s Sarsaparilla, a soft drink company, which made their own painting book in 1894, was one of a number of companies that used such books to advertise their products. Examples ranged from the National Lead Company, which made lead paints and a number of painting books as part of their Dutch Boy campaign in the 1920s, to Kentucky Fried Chicken Corporation’s 1965 Coloring Book. Popular franchises were also turned into coloring books, like Buster’s and Mary Jane’s Painting Book, which showed off the characters from the Buster Brown comic strip, created by Richard F. Outcault.

Because wax crayons only took off in the 20th century, initially watercolors were the pigments of choice. That’s why the early ones were generally called painting books. As the century progressed, and crayons increasingly provided easy pigmentation, coloring books became ubiquitous features of childhood. Even Dr. Spock remarked on their utility, suggesting “perhaps a coloring book or two, to keep the children occupied until the food is served,” as the New Yorker has noted. Art educators weren’t always on board with coloring inside the lines — some, like Viktor Lowenfeld, argued that coloring books limited children’s creativity.

By the 1960s, with coloring books firmly entrenched in American childhood, their adult counterparts experienced a resurgence, now with a radical and satirical twist that relied on the format’s association with innocence, as Laura Marsh explained for the New Republic. The Executive Coloring Book, published in 1961 by three Chicago advertising professionals, started the craze with darkly satirical caption instructions like “THIS IS MY SUIT. Color it gray or I will lose my job.”

By 1962, adult coloring books were the subject of a New York Times trend piece. Other hits from the period included a 1962 coloring book by Mort Drucker about President John F. Kennedy, which was the New York Times # 1 bestseller for 14 weeks, and the John Birch Coloring Book, which was not approved by the John Birch Society and poked fun at conspiracy theories. The Washington Post even reported on a doctor using a specially designed coloring book as a diagnostic tool for psychological disorders in 1963. Most coloring books, even adult ones, were not as controversial as the Black Panther Coloring Book, which was condemned by the Panther leaders and encouraged violence against police. The denunciation notwithstanding, 1,000 copies were printed, apparently by a FBI infiltrator, and the pamphlet featured at a House Committee on Internal Security hearing in 1970. Dover, a publishing company that supports the designation of Wednesday as National Coloring Book Day, has been producing adult coloring books for decades.

From educational tools to familiarize learners with art history, anatomy or complex systems to recreational coloring books, the phenomenon continues to evolve and surprise. 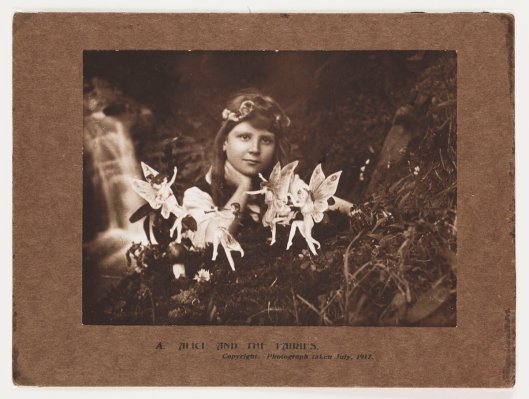 Inside the Elaborate Hoax That Made British Society Believe in Fairies
Next Up: Editor's Pick