President Donald Trump is due to be forced out of office. The commander-in-chief has been caught in a plot with Russian President Vladimir Putin, and is desperately working to save his presidency with the help of his son-in-law, Jared Kushner. The rest of the world is in chaos. It may sound like a grim prophecy—or a liberal fantasy—but in fact it’s the premise of Trumpus Interruptus, a comic play due to be performed at the Edinburgh Fringe Festival this summer.

This August, artists from both sides of the Atlantic are placing American politics at the heart of the Edinburgh Fringe, which claims to be the world’s biggest arts festival. Donald Trump may work 3,458 miles from Scotland’s capital but he’ll be on center stage there, as at least 23 shows at this year’s festival will seek to explore the past, present and future of his Presidency. Last year there was only one.

The “Fringe,” which runs this year from Aug. 4-28, has been a platform for young artists to make a name for themselves ever since it began in the late 1940s. It’s where the likes of Alan Bennett and Dudley Moore rose to prominence in the 1960 sketch show Beyond the Fringe and where a young playwright named Tom Stoppard had his first success with Rosencrantz and Guildenstern Are Dead in 1966. Alan Rickman, Rowan Atkinson, Steven Berkoff, Billy Connolly and others launched their careers on its stages. It’s uniquely democratic; the organizers do not select or commission the shows and absolutely anybody can perform if they can cover their costs. This year, over 3,300 shows will be staged. Many choose to perform for free, funding their shows by donations and working in the venues in lieu of a hire fee.

The festival is also no stranger to controversy. Most famously, Jerry Springer: the Opera was first staged there in 2002, which was boycotted by Christian groups for its foul-mouthed portrayals of Biblical figures including God and Jesus Christ. In 2015, pro-euthanasia Dr. Phillip Nitschke, who is banned from practicing medicine in his native Australia, put on a show that explored how to circumvent the laws on assisted suicide but first had to prove to local government officials that he wasn’t going to gas the audience. Elizabeth Burchell, a spokeswoman for the festival said at a briefing on June 7 that there’s always something to challenge audiences at the Fringe. “But that’s what art, theatre and what we do is all about. It’s actually provoking that debate and that discussion. It will be really interesting to see how that unfolds at the festival.”

Given the ongoing drama inside the White House, it’s perhaps inevitable that some feel it will make great theater. Zach Tomasovic, the 25-year-old author of Trumpus Interruptus, originally wanted to fictionalize a conversation between Trump and a journalist. But the 25-year-old comedian from Pennsylvania eventually decided that exploring the President’s impeachment in a theater setting would allow him, and his audience, to see how something like that might play out. “Trump is a muse,” he says. “This guy has inspired a lot of art and a lot of comedy.” To bone up on playing the nation’s 45th President, he jokes, he’s attempting a little fourth grade reading.

It’s not just Americans making light of the Trump presidency, though. British student Adam Woolf, 21, has directed and produced Trump’d!, a musical that he says is more silly than serious. Woolf is a member of Cambridge University’s famous Footlights, a comedy troupe which boasts big names like John Cleese, Hugh Laurie, Emma Thompson and John Oliver as former members. Trump’d! is again set in the future. The year is 2030 and Trump is getting round to building The Great Border Wall of Mexico in the fourteenth year of his first term.

When he first started working on the show in January 2016 Trump wasn’t even the Republican nominee, Woolf says, and it was tricky to find a balance at first. “He’s such a ridiculous figure—to the point where you can’t satirize him because he does that himself,” Woolf says. “We went between being very very silly and trying to cast a judgement.” Now, he continues, “there is something for everyone in it. People who like comedy, people who like musicals, people who like satire.”

Neither Tomasovic nor Woolf seem to be particularly worried that the Edinburgh crowds might revolt against their depictions of Donald Trump as some did when he was depicted as Julius Caesar in New York in June. After news spread that a Trump-like character was being assassinated onstage every night, a right-wing protestor disrupted the scene screaming “this is violence against Trump!” while another filmed it. The play reportedly resumed within a minute.

Woolf says he’s not expecting a huge amount of backlash, “bearing in mind we are in Edinburgh and not in America.” Tomasovic, the creator of Trumpus Interruptus, is even convinced that Republicans would like his show. “I think that you can laugh regardless of political allegiances … laughter is a universal truth,” he says. But he adds that the commander-in-chief might disagree. “The biggest thing that unsettles Trump is that the world laughs at him.”

But it’s not just theater where Trump is showing up. Festival-goers can also learn about fringe politics in Trump’s America, as VICE contributor Harmon Leon will reveal how he infiltrated anti-immigration vigilantes, abortion protesters and Christian gay conversion therapists. Archivist Rachel Hosker from the University of Edinburgh will be investigating whether archives hold facts, or alternative facts in a show entitled Alternative Facts: Is the Truth in the Archives? And of course, Edinburgh’s legions of standups are ready to use Trump as a muse. Seattle-based comedian Erich McElroy is even pledging to Make the Fringe Great Again.

Trump isn’t even the only figure from last year’s election to take center stage. Oliver Chinyere, who worked on Hillary Clinton’s presidential campaign, has a one-man show Unprecedented and Unpresidential: How Hillary Lost the Election, in which he will provide insight into the downfall of Trump’s onetime rival. The 33-year-old now works for Airbnb but worked as a digital analyst in Clinton’s Brooklyn HQ, where he worked with celebrities like Amy Schumer and Lena Dunham to boost Clinton’s chances.

In the show, which TIME saw in a preview in London in July, he explains how “we cocked it up” — standing alongside a life-size cardboard cutout of Trump, with words like ‘“Benghazi” and “emails” pinned to it. Although the President is a “fascinating phenomenon,” he told TIME, his show is more about “insight and foresight.”

Chinyere’s talk offers a less apocalyptic vision than Trump’d! and Trumpus Interruptus, but he does admit he was a little bit scared of the crowd reaction when he performed a version in New York earlier this year. Chinyere has to return to his day job, although he hints that he’d very quickly return to campaigning if Michelle Obama ran in 2020. But Tomasovic has ambitions to take Trumpus on a West Coast tour and an Off-Broadway run. “We would eventually like to take it to places that it wouldn’t normally show,” he adds.

The Fringe Festival, which turns 70 this year, has adopted the slogan “defying the norm since 1947” so perhaps it’s little surprise so many shows are reacting against the status quo in Washington. And if anybody takes issue? Tomasovic has a suggestion to loosen them up: “I would say ‘why don’t you just go and drink a pint.’” 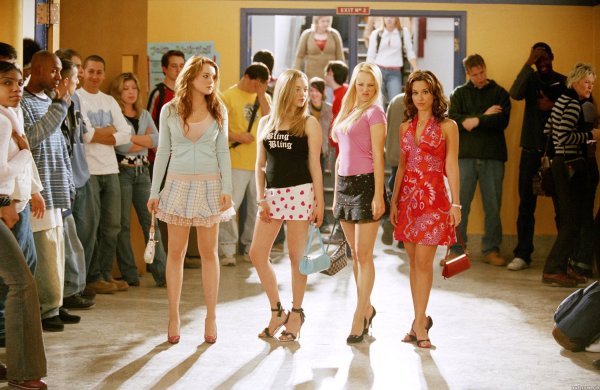 Here's Who's Playing the Plastics in The Mean Girls Musical
Next Up: Editor's Pick