The mayor of a southern Philippine city has become the third such official in less than a year to die in a shoot-out with police after being accused of having links to the illegal drug trade by Philippine President Rodrigo Duterte.

Police gunned down Ozamiz City Mayor Reynaldo Parojinog, his wife, two of his siblings, and 11 other people in a series of coordinated pre-dawn raids on properties including the mayor’s residence Sunday, multiple outlets report.

According to local authorities, officers were attempting to serve an arrest warrant to Parojinog when they were “met with a volley of fire” from security guards at his compound. They said they recovered a cachet of rifles, cash and illegal drugs inside.

“The Parojinogs, if you would recall, are included in President Duterte’s list of people involved in the illegal drug trade,” presidential spokesman Ernesto Abella said.

The mayor’s daughter Nova Echaves — who is also the vice mayor of Ozamiz City — was flown to Manila under police escort Monday, according to the Philippine Daily Inquirer. She has accused police of planting drugs at the scene. In a separate interview, a spokesman for the family denied the mayor’s security team had fired a shot.

On Monday, Philippine Senator Francis Pangilinan called the police’s version of events “unrealistic.” He questioned why they had decided to serve the mayor an arrest warrant at 2:30am, and why they had reportedly disabled CCTV cameras in and around his residence prior to entering.

Even when cases have been successfully bought against the Philippine police, however, there is scant precedent of justice being served.

Earlier in July, a team of 19 police officers that participated in the killing of another mayor, Rolando Espinosa, inside a jail cell last November were returned to duty. Their reinstatement came at the behest of Duterte and despite the country’s National Bureau of Investigation (NBI) declaring the killing a “rubout” that could be part of a much larger conspiracy.

Espinosa had been mayor of the town of Albuera in Leyte province, whose police commander was an officer named Jovie Espenido. A month after Espinosa’s death, Espenido was reassigned from Albuera to Ozamiz City, where Parojinog was mayor. 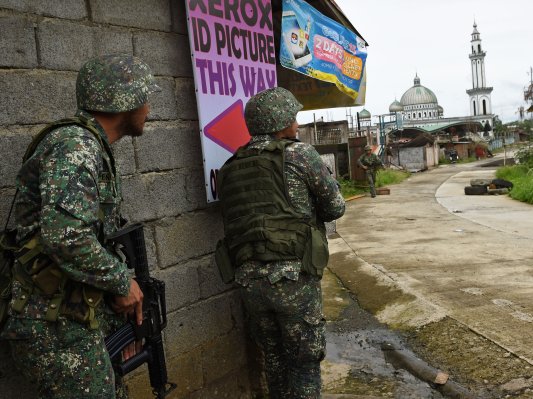 Duterte Says He Can 'Wait One Year' to End the Marawi Crisis
Next Up: Editor's Pick