A highly anticipated total solar eclipse set to hit the U.S. on Aug. 21 is shaping up to be a traffic nightmare for regions within the rare phenomenon’s path.

Federal and state officials are racing to spread awareness and allocate resources to communities projected to experience what is known as near or full totality — the brief but stunning moment in which the moon passes between the Earth and the sun and blocks the sun’s light, plunging the affected areas in 14 states into sudden darkness. The visually arresting sight will last up to a couple of minutes depending on the location. But that’s still enough time to throw off unsuspecting drivers, as well as to prompt major traffic congestion in states with prime viewing spots. This will be the first time in 99 years that the path of a total solar eclipse moves across the entire U.S. from coast to coast.

Doug Hecox, a spokesman for the Federal Highway Administration (FHWA), described the celestial occurrence as a “once in a lifetime” event, compounded by the fact that transportation as we know it was completely different the last time a solar eclipse spanned the U.S. in 1918. With the advent of cars, the so-called “Great American Eclipse” presents a new set of challenges.

“For example, back then, there were only 6.16 million cars on the road,” Hecox said. “Today, there are over 263 million. The risk of distraction is ever present on modern roads, and the eclipse could be the biggest driver distraction of the last century.”

With the eclipse expected to cross 29 interstate highway routes, the Federal Highway Administration is taking a number of precautionary steps, Hecox said, in coordination with the Department of Transportation, NASA, and the National Oceanic and Atmospheric Administration. Safety tips, including “do not rely on your automatic headlights when the eclipse blocks out the sun,” have been posted on an agency website and will also be shared on its social media platforms in the days ahead of the event. The agency has invited its roughly 3,000 employees nationwide to share brief PSA videos and photos encouraging safe driving, which will be posted on YouTube the week of Aug. 7. And the agency is working with traffic reporters in the 14 “totality states” to inform residents of appropriate planning and safety procedures, Hecox said.

Local governments have their work cut out for them. While a partial eclipse will be visible throughout the entire contiguous U.S., the states that will experience totality in some capacity, as shown on this eclipse map, are: Oregon, Idaho, Montana, Wyoming, Nebraska, Kansas, Iowa, Missouri, Illinois, Kentucky, Tennessee, Georgia, North Carolina and South Carolina.

We asked officials in four states along the path of the eclipse about their traffic management plans:

The Oregon Department of Transportation is “treating the eclipse as a major event [and] emergency,” spokesman David House said. As the first state to experience the spectacle, Oregon is expecting roughly a million people to be within the totality zone, leading to gridlock conditions on its interstates. “Oregon’s total population is about four million, so we are going to be very overcapacity,” House said, adding that the typical number of people on the state’s highways is only in the “tens of thousands.”

House said the department will not issue permits for very wide commercial trucks from Aug. 18 to Aug. 22, and the state’s Department of Motor Vehicles has barred driving tests at any of its 60 offices on the day of the eclipse. Highway crews will be pre-deployed to respond to any incidents in the heavy traffic.

Similar to Oregon, Nebraska will limit oversized truck loads, as well as roadside construction throughout the day of the eclipse, state Department of Transportation spokeswoman Jeni Lautenschlager said. While the totality path clips the edge of Lincoln, Nebraska’s capital and second most populous city, many stargazers are expected to venture about an hour’s drive south to Beatrice, which will get a better glimpse of the eclipse — so much so that Bill Nye the Science Guy is traveling to the city to see it. Much of the congestion will be focused on interstates and rural roads, Lautenschlager said.

Although Nashville is the largest city within the eclipse’s totality path, Tennessee is “looking at this as business as usual with more resources available,” state Department of Transportation spokeswoman B.J. Doughty said. She said the city is used to hosting heavily attended events like the Country Music Association Music Festival, but that the state has been “planning for [the eclipse] for quite some time.” To counter congestion, the department is deploying highway assistance responders and limiting lane closures. Interstates 24, 40 and 65 — all of which pass through Nashville — are expected to swell with traffic.

The total eclipse concludes its U.S. tour with a pass through South Carolina, where officials have been planning for its arrival since November, South Carolina Highway Patrol spokesman Sgt. Bob Beres said. Three of the state’s major cities — Greenville, Columbia and Charleston — are in the path of totality. Increased numbers of state police and first responders will be assigned to those locations, as well as the entire stretch of I-26, to mitigate heavy traffic, though “we cannot prevent it completely,” Beres said. 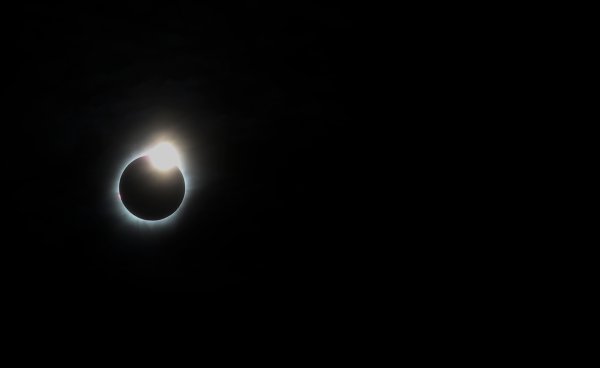 How to Watch the Total Solar Eclipse Live Online
Next Up: Editor's Pick