Solar Eclipse Glasses: Why Everyone Needs Them and Best Places to Buy Them

As people across the country prepare to watch what is being called “The Great American Solar Eclipse,” experts warn that viewing the phenomenon can be dangerous without the appropriate protection.

On Aug. 21, a total solar eclipse, where the moon completely covers the sun, will be visible in the U.S. from Oregon to South Carolina. It’s the first total solar eclipse that can be seen coast to coast and only from the continental U.S. since the country’s founding.

Experts warn against staring directly at the sun, which can damage the eyes. But eclipse gazers can find ways to protect themselves, using eclipse glasses and filters. Here’s everything you need to know, including where to find eclipse glasses and how to avoid counterfeit ones:

What are eclipse glasses?

Eclipse glasses often look like old-fashioned 3D glasses made from thick paper, but the lenses are black or may have a silvery coating on the outside and are specially built to block a majority of the sun’s rays.

“They’re much darker and much closer to a welder’s mask in blocking light than traditional sunglasses,” said Dr. Russell Van Gelder, a clinical spokesperson and past president of the American Academy of Ophthalmology. “They block about 99.99% of light rays.”

In comparison, ordinary sunglasses only block about 60% of light rays.

There are also special filters for telescopes, binoculars and cameras. Anyone who uses these devices without protection can increase the amount of damage to their eyes as they amplify the sun’s rays.

Why is it so dangerous to look at the eclipse without glasses?

Van Gelder notes that anyone who’s taken a magnifying glass out on a sunny day to burn holes in leaves has seen how powerful the sun’s rays are. When we look directly at the sun, the part of our eye that is in danger is the retina, a light-sensitive layer that can easily be damaged by high levels of light.

“There are not pain fibers in the back of the eye, unlike our skin. We have a natural aversion to staring at the sun, but it’s possible to overcome that by force of will,” Van Gelder said.

For those in the country who will witness a total solar eclipse, the roughly two-minute period of totality is safe to view without eclipse glasses or filters, according to Rick Fienberg, spokesperson for the American Astronomical Society. A total solar eclipse is about as bright as a full moon, he said.

Where can you buy eclipse glasses?

These glasses or filters are all designated as meeting the ISO 12312-2 standard, which means that the lenses have met the international standard for safely viewing the sun.

Where can you get eclipse glasses for free?

Steele said that between Thousand Oaks Optical and other companies, about 100 million filters and glasses have been produced and sold. He noted that he and other vendors he works with have been overwhelmed with orders, so anyone who wants to watch the eclipse should get their glasses and filters soon.

Are all eclipse glasses the same?

Fienberg, from the American Astronomical Society, says he’s seen counterfeit eclipse glasses and glasses with fake certifications appearing online, which means they may not properly protect an eclipse viewer’s eyes. Fienberg advises people buy directly from reputable and recommended vendors, as listed above. NASA, AAS and AAO have all issued warnings about counterfeit glasses and have put together lists of reputable sellers that have verified their glasses meet the ISO standard.

“What you absolutely should not do is search for eclipse glasses on the internet and buy whatever pops up in the ads,” AAS said in a release.

NASA also warns against using lenses that are homemade, wrinkled, scratched or older than three years. 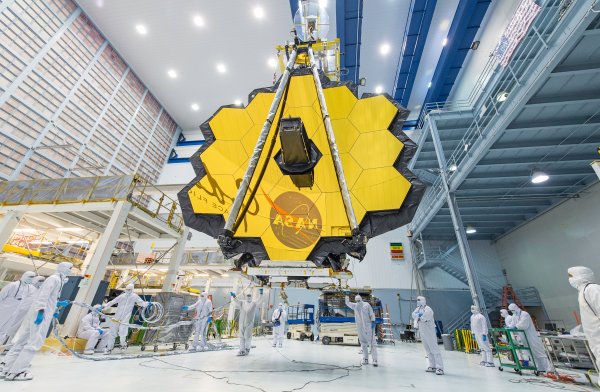 A New Age of Telescopes Is Dawning
Next Up: Editor's Pick