Drinking Wine Is Linked to a Lower Risk of Diabetes

Drinking alcohol—especially wine—every few days may help protect against type 2 diabetes, suggests a new study published in the journal Diabetologia. People in the study who drank three to four days a week were about 30% less likely to develop diabetes than those who drank less than once a week.

This isn’t the first study to find a link between drinking moderately—having up to 7 drinks a week for women and up to 14 drinks a week for men—and a reduced diabetes risk, compared to not drinking at all. (Heavy drinking, however, is known to increase the risk of diabetes.)

For the new study, researchers analyzed data from more than 70,000 healthy Danish adults who were surveyed about their health and drinking habits around 2007. They tracked them for five years to see who developed type 2 diabetes.

The timing of those drinks also mattered. Drinking three to four days a week was linked to the biggest risk reduction. For women, very infrequent drinking (less than one day a week) was also associated with slightly lower diabetes rates, compared to being a lifetime abstainer.

“For the same total weekly amount of alcohol, spreading it out on more days is better than drinking it all together,” said lead author Janne Tolstrup, professor of epidemiology and intervention research at the University of Southern Denmark’s National Institute of Pubic Health, in an email.

Wine seemed to have a special edge. This study, and previous ones, found that moderate-to-high intake of wine was associated with lower diabetes risk—possibly because the polyphenol compounds in red wine may help manage blood sugar, the authors wrote.

Moderate consumption of beer was also linked to lower diabetes risk for men in the study, but not for women. The researchers say that may be because not enough women in their sample reported drinking beer to show a strong association. (Most drank wine.)

As for spirits, the researchers found no association with diabetes risk in men—but women who had at least seven hard-liquor drinks per week had an 83% increased risk of diabetes compared to those who had less than one. These results are also uncertain, says Tolstrup, since fewer people in the study reported drinking spirits regularly.

While the study suggests a link between alcohol and a lower risk of type 2 diabetes, the study cannot determine that alcohol causes these protective effects. Tolstrup also points out that alcohol is related to more than 50 different diseases and conditions—in both positive and negative ways. The study did not, for example, take into account the increased risk of breast cancer that’s been associated with even low levels of alcohol consumption.

“Any recommendations about how to drink and how much to drink should not be inferred from this study,” she says, “or any study investigating associations between alcohol and a single outcome such as diabetes.” Alcohol affects virtually every organ system in the body, Tolstrup says. She recommends that people stick to current guidelines for moderate drinking, and doesn’t advise current abstainers to start drinking for health reasons.

The results, while interesting, call for more research.

Dr. Ronald Tamler, medical director at the Mount Sinai Clinical Diabetes Institute, was not involved in the new study, but says it confirms observations from previous research. He also recommends drinking in moderation, “up to one drink a day for women and two drinks a day for men,” he said in an email.

“My patients are happy when they ‘confess’ that they have a glass of wine with dinner, and I tell them they should feel free to continue their evening routine,” Tamler says. “However, I do not advise patients to start drinking just to reduce risk of developing diabetes.”

Tamler also points out that the study focused on people developing a new diagnosis of diabetes. “Once somebody has diabetes, different forms of alcohol can have very different effects,” he says. “Beer may increase blood sugar levels (carbs!) while hard liquor may lead to dangerously low glucose levels.” 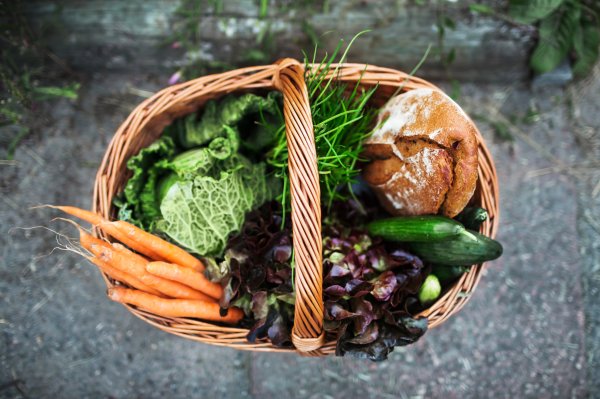 4 Science-Backed Health Benefits of Eating Organic
Next Up: Editor's Pick