My youngest son, who is 10, has long had an obsession that crops up whenever we get in the car. As he climbs into the back seat he will peer over my shoulder at the dashboard and, depending on his mood, may ask the question we both know he is thinking: “Are we going to run out of gas?”

My youngest sister — his aunt — is a therapist and the wise woman who taught me the possible-probable trick. And so I say to my son: “Is it possible for our Subaru to run out of gas when it has half a tank and we are only driving two miles to Costco and back? Perhaps. But it is definitely not probable.”

Possible vs. probable. When applied in the right circumstance, it almost always gives you the right answer. Even better, it gives you the feeling that you are in control.

For the record, we have never run out of gas. And I would rather not take this particular, seemingly nonsensical gas-tank worry seriously. But given our gene pool, I know I should. My son hails from a long line of people who used to be called worrywarts — ask me sometime about my childhood fear of vomiting — until the 21st century arrived and we woke up one day to learn that we actually suffer from anxiety, in varying degrees. (If you were to meet my child, you would find a happy, charming, intellectually curious fellow. But you’re not driving to Costco with him.) Anxiety has impacted the lives of several of my family members in serious ways that I am not permitted, per unspoken family law, to discuss in this column. And we are far from alone. More than 6 million American teens have had an anxiety disorder, according to National Institute of Mental Health data; at my son’s most recent checkup, his pediatrician remarked matter-of-factly that treatment solutions haven’t kept pace with the number of anxious kids.

Which brings me to the strong control-freak current also running through our gene pool. Supposedly, controlling parents are more likely to produce anxious children. But there is a fine line between setting boundaries and controlling, between guiding choices and telling your kids what to do because Mom actually does know best a good deal of the time. At age 10, my son has reached a childhood inflection point, approaching the end of elementary school, crossing over from the years when I had control over much of his existence to the years when it becomes increasingly clear how little control I really have.

When your son is 10, his worries seem quaint: little kids, little problems. But his two older brothers, who are 19 and 22, are big kids now, with their big-kid problems stretching into their youngest sibling’s understanding of the world the way their long legs stretch clear under the kitchen table at dinner. When we sit as a family at that table, the older boys are protective of their young brother and his innocence: they know not to curse, not to listen to songs with vulgar lyrics, not to talk about friends who drink too much or smoke weed or skip class. Still, things happen in the lives of 19- and 22-year-olds that demand dinner-table discussion. And so, as the little guy listens, wide-eyed and silent, scary stories unfold: from the inconvenient (a minor car accident) to the truly heartbreaking (a roommate whose life ended before he could graduate from college). Is this why, when I recently took his eldest brother to the emergency room for what turned out to be a stomach virus, my youngest asked, “Is he going to die?”

Possible vs. probable is not foolproof. My two older sons have reached an age when it doesn’t work on them. They are old enough to have learned that tragically improbable things do happen, that parents can’t control much and that helpful constructs from Aunt Claire won’t erase a biological inheritance generations in the making. As they have grown into young men, I have become less a boundary setter. Less a guide. More a … presence. A loving, nonjudgmental (well, I try) and constant presence.

And with my sweet, wide-eyed 10-year-old who alternately seems to understand nothing at all and far too much, I will cling to possible vs. probable for as long as it works. Perhaps the very things I do to try to protect him just make him more vulnerable to anxiety. Smarter minds than I will have to figure that one out. But I know one thing for certain, which is that my wonderful little boy has all the time in the world to learn how sad and uncertain life can be. And once he does, there will be only so much I can do. 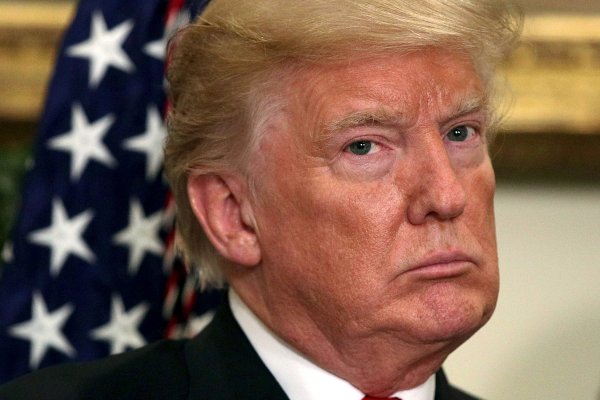 Go Ahead, Psychiatrists: Diagnose Donald Trump
Next Up: Editor's Pick