Notre Dame Cathedral Is Crumbling. Who Will Help Save It?

On an average summer day in Paris, about 50,000 tourists pass through Notre Dame cathedral, one of the finest buildings of the medieval era still standing. Visitors from dozens of countries gaze up at the spectacular stained-glass windows, tiptoe through its vast choir and nave and whisper in awe at the centuries-old sculptures and paintings that line the walls.

Notre Dame, which looms over the capital from an island in the center of the city, is a constant reminder of Paris’ history. It has seen more than its share of epic dramas, including the French Revolution and two world wars. But now there is another challenge. Some 854 years after construction began, one of Europe’s most visited sites, with about 12 million tourists a year, is in dire need of repairs. Centuries of weather have worn away at the stone. The fumes from decades of gridlock have only worsened the damage. “Pollution is the biggest culprit,” says Philippe Villeneuve, architect in chief of historic monuments in France. “We need to replace the ruined stones. We need to replace the joints with traditional materials. This is going to be extensive.”

It will be expensive too, and it’s not at all clear who is prepared to foot the bill. Under France’s strict secular laws, the government owns the cathedral, and the Catholic archdiocese of Paris uses it permanently for free. The priests for years believed the government should pay for repairs, since it owned the building. But under the terms of the government’s agreement, the archdiocese is responsible for Notre Dame’s upkeep, with the Ministry of Culture giving it about €2 million ($2.28 million) a year for that purpose. Staff say that money covers only basic repairs, far short of what is needed. Without a serious injection of cash, some believe, the building will not be safe for visitors in the future. Now the archdiocese is seeking help to save Notre Dame from yielding to the ravages of time.

Many of Notre Dame's gargoyles, which act as rain spouts, have corroded and been replaced with PVC tubes, July 2017.
Vincent Fournier for TIME

The architects of Notre Dame knew all too well about lengthy building work; it took more than a century to build the cathedral, beginning in 1163. It was periodically vandalized over the turbulent centuries that followed. Rioting Huguenots damaged parts of the building they believed to be idolatrous in the mid–16th century. During the French Revolution, mobs of people carted off or smashed some of its paintings and statues. The hated royalty suffered the brunt of the carnage, with crowds destroying 28 statues of monarchs from the building’s Gallery of Kings. After that, Notre Dame languished in neglect.

Then in 1831 came Victor Hugo’s book The Hunchback of Notre Dame, whose hero was the disfigured bell ringer Quasimodo. In it, France’s beloved writer raised alarm about the building’s decay, describing “mutilations, amputations, dislocations of the joints.” “Beside each wrinkle on the face of this old queen of our cathedrals,” he wrote, “you will find a scar.”

But for Notre Dame, Hugo’s book sparked fresh problems. The best seller inspired a restoration in 1844, which used low-quality stone and even cement, since France at the time could not produce the quantities of high-grade material that the job required.

Stonework has fallen from Notre Dame cathedral in Paris. Low-quality stone and cement were used in a restoration in 1844. Nearly 200 years on, that 19th century work is crumbling (though some of the painstaking medieval construction is in better shape).
Vincent Fournier for TIME

Nearly 200 years on, that 19th century work is crumbling (though the medieval construction is mostly in better shape). One blazing hot day in early July, a staff member unlocked an old door off the choir and led TIME up a stone spiral staircase and out onto the roof, high above the crowds. Here, the site seemed not spiritually uplifting but distressing. Chunks of limestone lay on the ground, having fallen from the upper part of the chevet, or the eastern end of the Gothic church. One small piece had a clean slice down one side, showing how recently it had fallen. Two sections of a wall were missing, propped up with wood. And the features of Notre Dame’s famous gargoyles looked as worn away as the face of Voldemort. “They are like ice cream in the sun, melting,” says Michel Picaud, head of the nonprofit Friends of Notre Dame de Paris, looking up at them.

What is more, some fear the problem is getting worse. “The damage can only accelerate,” says Andrew Tallon, an associate professor of art at Vassar College in Poughkeepsie, N.Y., and an expert on Gothic architecture. Having carefully studied the damage, he says the restoration work is urgent. If the cathedral is left alone, its structural integrity could be at risk. “The flying buttresses, if they are not in place, the choir could come down,” he says. “The more you wait, the more you need to take down and replace.”

The church was not fully aware of the extent of the problem, say those at Notre Dame. Until a few years ago, the government effectively made the private areas off-limits. “There used to be about 200 old keys, so it was very, very difficult,” says André Finot, a spokesman for Notre Dame. Eventually, the government standardized the keys and allowed its tenants to climb the hidden stone staircases and access the upper levels. “We were shocked when we got up there,” Finot says.

Some 854 years after construction began, Europe's most visited site, with about 12 million tourists a year, is in dire need of repairs. Centuries of weathering have worn away at the stone with pollution being the biggest culprit, July 2017.
Vincent Fournier for TIME

The government hasn’t completely ignored the cathedral’s plight. In 2012, its bells were replaced to mark its 850th birthday. This year, authorities budgeted an extra €6 million ($6.84 million) to restore the spire. Water damage to the spire’s covering is threatening the wood-timber roof, which the medieval craftsmen built using 5,000 oak trees. The restoration will begin in the fall. But a Ministry of Culture official says Notre Dame should not expect regular help of this kind. To the government, the cathedral is just one of many old buildings in need of care. “France has thousands of monuments,” says the official, who was not authorized to speak to the media. Among them, Notre Dame is not necessarily the most pressing case. “It will not fall down,” she says.

Still, there is plenty of alarm in the church. Finally accepting that the government would not pay to restore the cathedral, the archdiocese launched Friends of Notre Dame in October to appeal for help. It hopes to raise €100 million ($114 million) in the next five to 10 years. “There is no part of the building untouched by the irreparable loss of sculptural and decorative elements, let alone the alarming deterioration of structural elements,” the organization says on its website. The cathedral, it says, “is in desperate need of attention.”

Picaud, a retired software executive who heads the fundraising effort, says he is planning a marketing drive in Paris in November. But he believes the bulk of the money will come not from the French but from Americans, millions of whom know Notre Dame and who are less hesitant than the French about giving money to the church. “People don’t want to give money because of laïcité,” says Finot, referring to the strict secularism that infuses French law. “So our message is, This is not about religion. It is about our heritage. Notre Dame is open to Muslims, and everyone.” Finot and Picaud expect to raise most of the funds through large donations and are discussing with government officials whether to acknowledge that generosity with a plaque at Notre Dame.

In April, the U.S. Internal Revenue Service granted Friends of Notre Dame tax-free status, and the organization is planning to hold a five-city American road show in spring 2018 in an all-out push to raise the money. By the time serious renovation work begins–perhaps sometime before the end of this decade–the damage could be worse than it is today. But at Notre Dame, history is counted not in years but in centuries. “We hope it will last forever,” Picaud says. “But it cannot last forever without this renovation.” 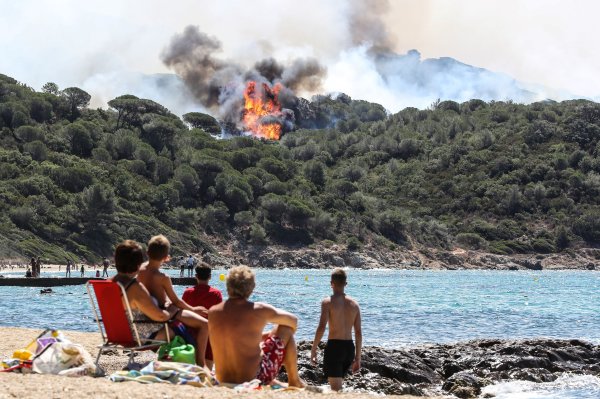 Wildfires in Southern France Force 10,000 to Evacuate
Next Up: Editor's Pick