Larry David, who wowed Saturday Night Live viewers during the 2016 election cycle with his portrayal of Democratic primary candidate Bernie Sanders, revealed Wednesday that they are actually related.

Variety reports that the Seinfeld co-creator learned of the family links when he was taking part in the PBS program Finding Your Roots, in which celebrities discover previously-unknown branches of their family trees.

“I was very happy about that,” the comedian said during an appearance Wednesday at the Television Critics Association press tour, where he was promoting the upcoming return of his HBO series Curb Your Enthusiasm. He didn’t say in detail how he and Sanders are connected, telling the audience that the former presidential candidate is “a third cousin or something.”

David also talked at length about how his SNL stint as the Vermont senator came to be. “During the first debate between Bernie and Hillary [Clinton], Lorne Michaels (the creator of SNL) got emails and calls during the debate, saying that I should be doing Bernie Sanders,” he told the audience.

It all started in earnest after the debate, according to David, when talent agent Ari Emanuel “called me up and said, ‘What did you think?'”

David told the audience that, “I said ‘You know, it would be a good thing for Saturday Night Live,’ not thinking in a million years.”

Curb Your Enthusiasm returns on Oct. 1 on HBO. 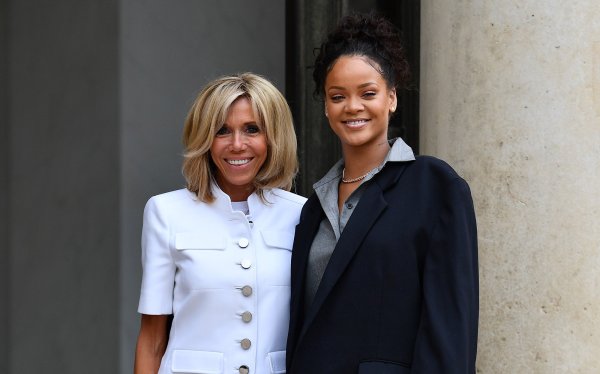 Rihanna Hanging Out with French First Lady Brigitte Macron in Paris Is the Alliance Of Your Dreams
Next Up: Editor's Pick