Why the Transgender Troop Ban May Backfire Politically

Before Wednesday was over, President Trump’s ban on transgender troops already looked like a political miscalculation.

Senate Republicans either ducked questions on the subject or came out strongly against the ban, including Senate Armed Forces Chairman John McCain, who questioned why the military was looking to fire thousands of military members who had received millions of dollars in training.

Trump’s move was apparently meant to drive a wedge between heartland Democrats and their blue-collar constituents. One Administration official told Axios that electoral politics helped guide the decision.

“This forces Democrats in Rust Belt states like Ohio, Michigan and Wisconsin, to take complete ownership of this issue,” the official said. “How will the blue-collar voters in these states respond when senators up for re-election in 2018 like Debbie Stabenow are forced to make their opposition to this a key plank of their campaigns?”

What this official missed: Stabenow has a perfect 100% score from the Human Rights Campaign, the nation’s largest LGBT organization, for the last session of Congress. Even facing a potential showboat challenge from Kid Rock in 2018, it’s unlikely the seasoned Senator would flinch in the face of Trump’s tweetstorm.

And in Wisconsin? Voters there in 2012 elected Tammy Baldwin, making her the first woman elected to the Senate as a lesbian. She’s up for re-election this year, and LGBT rights are not expected to be a liability for her.

Democrats’ reaction to the policy also indicated that they weren’t afraid of an electoral threat.

In fact, Democrats here in the heartland—and beyond—have decided embracing LGBT rights is good politics. Younger voters overwhelmingly support the issue, have no issue with same-sex marriage and don’t really get the hullabaloo over transgender identities. Even in the most blue-collar towns, a neighbor’s LGBT sexual orientation is less an issue than if they root for the wrong football team.

“This is a non-issue being made into an issue to score cheap political points rather than address legitimate national security concerns,” said Rep. Tim Ryan, a Democrat who represents the Youngstown, Ohio, area, which the president just visited. “Donald Trump is quick to tout his love of the troops, but it is clear that his love and support is conditional.”

Sen. Sherrod Brown, an Ohio Democrat who is among the party’s most vulnerable on the ballot in 2018, pulled no punches. “All who serve in our military deserve our gratitude & respect,” he tweeted. “We should not turn away people who are willing & able to serve this country.”

Even as Democrats try to figure out their path forward, no one seriously questions whether they should retreat from the LGBT provisions in their platform. Even former Obama campaign advisers acknowledge that the 2008 campaign was the last time Democratic voters would be asked to back a candidate who didn’t offer full-throated support for LGBT rights. “Doesn’t get much more cynical than this,” said one veteran of Obama’s 2008 campaign, Tommy Vietor. “It’s chum in the water for the base,” tweeted a second, chief strategist David Axelrod.

Republicans were not pleased, either. “This is WAY beyond what we expected,” one aide to House Leadership said. Across the Capitol, an aide to GOP Leadership asked the White House: “Don’t we have enough going on today?”

The GOP is trying to fight other significant policy battles already. The debate over health care is consuming the Senate. The prospect of rewriting the tax code looms on the horizon. Just hours before Trump tweeted about transgender troops, he was in Ohio promising working-class voters that he would push a $1 trillion infrastructure plan that would increase demand for American-made steel and aluminum to rebuild roads, bridges and airports.

Talking about gender identity is not going to make health care coverage better, lower taxes or build new tunnels. That’s part of the reason 24 House Republicans joined with Democrats to reject a proposal that would have blocked medical treatment to transgender military members.

Casey Pick, a former top official with the Log Cabin Republicans, an LGBT group of conservatives, urged her friends on Facebook to withhold judgment until more was known.

“I can’t say much of substance yet, in part because there’s little substantive to be said—the tweets blatantly contradict a Department of Defense announcement made earlier this morning, and it appears confusion reigns in the administration,” she wrote. “Just know this: until there is actual policy implementing this, it is only a series of ugly tweets, and even if the administration does attempt to enact such a ban, there’s an army of us ready and willing to fight back.”

So, yet again, the chaos in the White House left its natural allies scratching their heads—and handed Democrats another way to lambaste a President who seems intent on ad-libbing his was to policy, 140 characters at a time. One adviser to the Senate’s campaign committee even groused that the tweet targeted Stabenow, who is beloved in her state, and not another vulnerable Democrat such as Brown or West Virginia’s Joe Manchin. At the White House, newly elevated press secretary Sarah Huckabee Sanders struggled on specifics, finally threatening to shut down the briefing if reporters kept asking her about specifics for transgender service members.

The tweeted policy seemed to have come from someone who hasn’t spent much time considering what works in Democratic circles or how to implement policy that affects those already overseas. Less than a week after Sean Spicer resigned as press secretary, the messaging coming from the White House seems to have taken on a more confrontational, if not tribal, tone. Spicer, a Navy reserve officer who served as the chief strategist at the Republican National Committee, would have strongly objected to this type of wedge issue—not necessarily because of its content, but because of its timing and targeting. After all, being pro-LGBT is good business these days, and Trump will need to raise $1 billion to win a second term.

Trump’s move was decidedly reminiscent of a strategy Republicans used in 2004 to inspire social conservatives to turn up at the polls to vote for state bans on same-sex marriage. White House strategist Karl Rove decided so-called “values voters” would show up in droves, inspired by the messages they were hearing in the pulpit, and vote for George W. Bush while they were there. Bush won re-election.

But it’s been 17 years since that tactic worked and public opinion has shifted dramatically on LGBT rights. (The LGB part is certainly more well-understood at this point than the T, a point of contention among activists and donors alike.) Trump already is seen as a bully, and attacking the troops—regardless of their gender at birth—is bad politics.

Drawing the military into this fight may, in fact, backfire. Few institutions in America retain as broad a confidence as the armed forces. Members of the military—straight or gay, cisgender or transgender, male or female—are among the most respected members of their communities. Telling those already in uniform that they are unfit can be seen as an insult to not just those individuals, but those who serve with them and their families. And an outright ban on service will create thousands of camera-ready victims.

Finally, the move assumes a faulty understanding of military attitudes. The mixed- to negative-opinion of repealing the policy that banned gays and lesbians from serving openly in uniform has turned more favorable after Congress repealed the Don’t Ask Don’t Tell policy. Anti-discrimination training has proven effective at curbing anti-LGBT attitudes—or at least making military members think twice before mouthing off. The openly gay chief of staff to a Defense Secretary was elevated to Army Secretary at the end of Obama’s term. (He left when Trump took office.)

At the White House, Trump quickly switched the topic of his tweets as the Pentagon, the national security establishment and even his own team tried to grapple with what his tweets meant. Exactly 40 minutes after he announced the new transgender policy via tweet, Trump was back to trashing his own Attorney General. 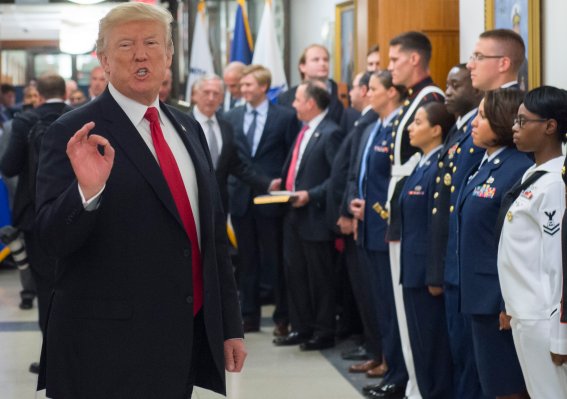