How to Watch the Total Solar Eclipse Live Online

A total solar eclipse that crosses the U.S. from coast to coast will be visible on Aug. 21, 2017, and millions of people across the country will witness it in person or by watching live video online. In a total solar eclipse, the moon moves directly between the Earth and the sun, completely obscuring the sun’s face. During the brief minutes of the total eclipse, the sky darkens and the air cools.

For those who want to see the total eclipse in person, it will be visible in parts of 14 states, including Oregon, Idaho, Wyoming, Nebraska, Missouri, Kentucky, Tennessee, Georgia, North Carolina and South Carolina, and will last for up to two minutes and 40 seconds. Skygazers in other states will be able to see a partial eclipse, but for those who want to experience the total eclipse, there are plenty of ways to catch it live online.

TIME will stream the eclipse starting at 12 p.m. EDT on Aug. 21 on Time.com, along with its Facebook and YouTube pages. Spaceflight historian and YouTuber Amy Shira Teitel will co-host the viewing from New York City, while TIME’s Jeff Kluger will co-host it from Casper, Wyo. The free livestream will feature interviews, information on how solar eclipses work, a history of eclipses, a segment on safe viewing practices and more. The astronaut Marsha Ivins will also join the livestream on air.

Additionally, TIME and LIFE VR will be producing a 360° VR livestream of the solar eclipse on TIME’s Facebook and YouTube pages, in partnership with Mesmerise Global. The stream will show an on-the-ground view from Casper, Wyo., including footage of the solar eclipse in totality as well as scenes of revelers who have gathered for the event. An edited version of the 360° livestream will also be available in the LIFE VR app for iOS and Android and in LIFE VR’s Samsung VR channel immediately following the eclipse.

Elsewhere, NASA will host an “Eclipse Megacast,” a four-hour program covering the eclipse as it moves across the U.S., on its website. NASA’s coverage will allow viewers to interact with scientists and people who are viewing the eclipse in person, according to the organization. NASA TV will also broadcast the program, as will some local television stations.

You can also watch the eclipse online at Slooh, a space broadcaster that is holding a three-day festival in honor of the eclipse. Slooh will cover the eclipse as it travels from coast to coast and broadcast views of it from Idaho. 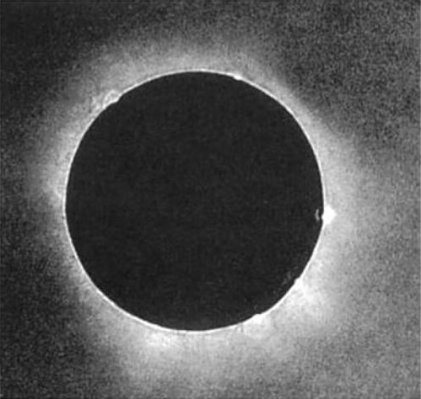 This Is the First-Ever Photo of a Total Solar Eclipse
Next Up: Editor's Pick