Here's Everything President Trump Has Said About the LGBT Community

President Donald Trump announced in a series of tweets on Wednesday that the government will not allow transgender people to serve in the U.S. military. The move represents Trump’s latest flip-flop on his stance on LGBTQ rights; He promised on the campaign trail to protect and support the LGBTQ community.

The president’s Twitter statement on Wednesday pointed to “tremendous medical costs” and “disruption” as the reasoning behind the decision.

“After consultation with my Generals and military experts, please be advised that the United States Government will not accept or allow Transgender individuals to serve in any capacity in the U.S. Military,” he wrote.

“Our military must be focused on decisive and overwhelming victory and cannot be burdened with the tremendous medical costs and disruption that transgender in the military would entail,” Trump continued.

The news comes a little more than a year after the Pentagon lifted a ban against transgender men and women serving in the military.

Here are all of the things Trump has said and done to appeal to the LGBTQ community:

He Vowed During His RNC Speech to Protect LGBTQ Citizens

One month after the June 2016 shooting at the gay nightclub Pulse, Trump promised during his lengthy speech at the Republican National Convention to protect the targeted LGBTQ community from Islamic Terrorism.

“Only weeks ago, in Orlando, Florida, 49 wonderful Americans were savagely murdered by an Islamic terrorist,” Trump said as he accepted his party’s nomination for president. “This time, the terrorist targeted LGBTQ community. No good. And we’re going to stop it.”

“As your president, I will do everything in my power to protect our LGBTQ citizens from the violence and oppression of a hateful foreign ideology. Believe me!” he continued.

Trump Waved an LGBTQ Pride Flag at a Campaign Rally

During an October rally in Greeley, Colorado, Trump took to the stage waving a rainbow flag with the words “LGBTs for Trump” scrawled on the fabric.

A supporter presented the 71-year-old with the flag before he interacted with the crowd at the Bank of Colorado Arena on the University of Northern Colorado campus.

Shortly after North Carolina enacted HB2, a sweeping law banning people from using bathrooms that don’t match the sex indicated on their birth certificate, Trump said the state had made a mistake.

Transgender people should “use the bathroom they feel is appropriate,” Trump, then the GOP presidential frontrunner, said on the Today show in April.

“There’s a big move to create new bathrooms” for transgender people alone, Trump continued. “First of all, I think that would be discriminatory in a certain way. It would be unbelievably expensive for businesses and for the country. Leave it the way it is … There have been very few complaints the way it is.”

Trump quickly backtracked after facing criticism from social conservatives — “I think that local communities and states should make the decision,” he said. “And I feel very strongly about that. The federal government should not be involved.”

In February, Trump sparked outrage when his administration revoked Obama-era guidelines telling public schools to allow transgender students to use the bathrooms and locker rooms that correspond with their gender identities.

The move withdrew federal protections for transgender students issued by the Obama administration last May. The guidelines had already been put on hold by a federal judge after 13 states filed a lawsuit against them.

The moment Trump was sworn in as president in January, the LGBT page — along with the climate change, health care, and civil liberties pages — disappeared from the website of the brand new Trump White House.

The White House’s official LGBT page, WhiteHouse.gov/LGBT, now shows only a simple message: “Thank you for your interest in the subject. Stay tuned as we continue to update whitehouse.gov.”

Trump Said He Was ‘Fine’ with Same-Sex Marriage

In a November interview with Lesley Stahl on 60 Minutes, the business mogul said he doesn’t plan on fighting the Supreme Court decision to legalize same-sex unions in all 50 states.

“It – it’s irrelevant because it was already settled,” he said when asked if he supported same-sex marriage. “It’s law. It was settled in the Supreme Court. I mean it’s done.”

“They’ve been settled, and I’m fine with that,” he added.

Just months earlier, in March, Trump told PEOPLE that he “would have liked to have seen [gay marriage laws be] a state thing, but the courts have ruled.”

In 2011, he told The Des Moines Register: “I’m not in favor of gay marriage. They should not be able to marry.”

He Vowed to Protect the Rights of LGBTQ Workers

In a January White House statement, officials claimed that Trump would enforce executive orders to protect the rights of the LGBTQ community in the workplace.

“President Trump continues to be respectful and supportive of LGBTQ rights, just as he was throughout the election,” the statement read. “The President is proud to have been the first ever GOP nominee to mention the LGBTQ community in his nomination acceptance speech, pledging then to protect the community from violence and oppression.”

However, earlier this year, Trump revoked the Fair Pay and Safe Workplaces order, which was implemented by Obama in 2014 to ensure that companies with federal contracts comply with more than a dozen labor and civil rights laws, according to NBC News. 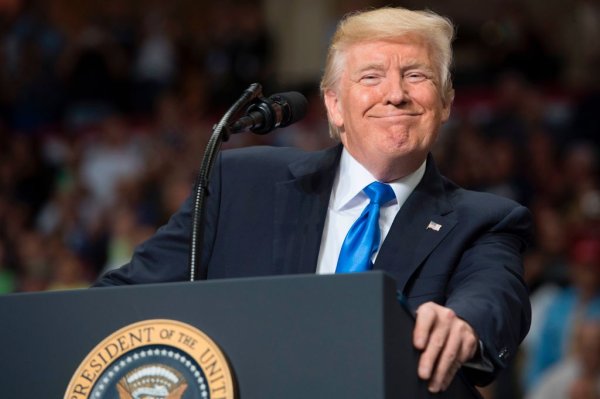 'I Can Be More Presidential Than Any President.' Read Trump's Ohio Rally Speech
Next Up: Editor's Pick