Early in Atomic Blonde, Charlize Theron slowly stands up from an ice bath. Her back emerges, sinewy and covered in myriad dark purple bruises. When she looks in the mirror, a badly blackened eye stares back. This is not a woman to be crossed.

Theron plays Lorraine Broughton, an MI6 agent sent on a treacherous mission to Berlin in 1989, five days before the Wall falls. The movie is a neon spree through underground parties and glittering speakeasies backed by thumping ’80s pop music. Lorraine, based on a character from the graphic novel The Coldest City, isn’t like most female heroes: she’s not a grieving widow, she’s not a protective mother, and she definitely doesn’t have daddy issues.

“Writers are always giving women dead husbands or kids to make you emotionally invest,” says Theron over tea at the Chateau Marmont in Los Angeles this June. The 41-year-old actor is still wearing athletic gear from a workout with her trainer for the movie, though filming has long wrapped. “Men go on a fun journey. Women get a long backstory so you’re already forgiving them for what they’re about to do.”

MORE: Review: Atomic Blonde Kicks You Where It Hurts

Not Lorraine. She does everything the men always have—exchanging blows and bullets—except backward and in heels. Until she slips off one of those heels and wields it as a weapon.

This isn’t Theron’s first time playing an unapologetic brawler. The Oscar winner has been a prostitute turned serial killer, a failing and bitter author, Snow White’s black-hearted tormentor and a one-armed road warrior. “I play effed-up, vulnerable women who have to be strong in order to survive,” says Theron.

Atomic Blonde, out July 28, comes at a turning point for women-led action films. In June, Wonder Woman shattered outdated notions that audiences don’t want to watch women kick butt. It’s currently the highest-grossing movie of the summer, bringing in $389 million in the U.S.

People want to see female action heroes. The question that matters now is how quickly Hollywood will allow them to go dark. After all, male action heroes have run the gamut from basically good (Indiana Jones) to explicitly bad (Dirty Harry) for decades. Wonder Woman is the former, a near perfect goddess who strives to always do what’s morally right. Theron’s Lorraine is anything but.

Charlize Theron photographed at the Universal Lot in Los Angeles on June 8 2017
Amanda Demme for TIME.

Theron grew up on a farm in South Africa. Her father struggled with alcohol and was abusive. When Theron was 15, her mother, Gerta, shot and killed him in self-defense. But Theron’s mother taught her not to wallow in self-pity. “I’m not the first person and won’t be the last person to go through something traumatic,” she explained on her friend Aisha Tyler’s podcast Girl on Guy last year.

By the time she was 17, Theron had moved to America to study at the Joffrey Ballet School in New York. When a series of injuries left her unable to dance, she began to pursue acting. Casting directors pegged her for the ingenue: her character in Woody Allen’s 1998 Celebrity was actually named “Supermodel.”

Theron’s big break came in 2003 after Patty Jenkins, who also directed Wonder Woman, cast her in Monster as a prostitute who avenges her rape by murdering her clients. Theron won an Oscar for the role, the character’s toughness mirroring her own. “She’s a real-life badass,” says Jenkins. “And she can do whatever she wants on film.” Adds Keanu Reeves, who co-starred with her in The Devil’s Advocate (1997) and was her sparring partner as she prepared for Atomic Blonde, “She brings brutal grace to her characters.”

Still, her first major foray into the action genre, 2005’s Aeon Flux, was a flop. Hollywood took that film’s failure—along with Catwoman and Elektra, which also bombed around the same time—as a sign women couldn’t headline a profitable action flick. “We get screwed because one movie doesn’t work,” says Theron, “I experienced that with Aeon Flux.” She admits the film was flawed, but then, “It was like, ‘Your chance is up.’”

A decade later Theron starred in Mad Max: Fury Road, part of a wave of films—including the Hunger Games series and Star Wars: The Force Awakens—that definitively proved the opposite. That movie was marketed as a testosterone-fueled car chase across a post-apocalyptic wasteland. But anyone who saw it quickly realized the story actually belongs to Furiosa, the one-armed rebel Theron played to stoic perfection. Sure Max (Tom Hardy) was in the car, but it was Furiosa’s mission to smuggle a group of sex slaves to an all-female paradise that captured audiences and turned the film into a $378 million box-office smash.

“It took me years to find the skin that I would be comfortable in to play this woman,” she says. “I had such a sense of relief when we realized she needed to be in a T-shirt, not a Barbarella outfit, and I needed to shave my head.”

Atomic Blonde is brutal. Lorraine is lethal, crafting weapons out of, well, everything. A corkscrew becomes a shiv. A backpack becomes a cudgel. A hot plate becomes a hammer. And, in a nod to a classic technique taught in women’s self-defense classes, keys become brass knuckles.

Her foes are just as savage. The film’s violence will make some viewers uncomfortable. In one sequence that only lasts about 20 minutes but feels like an hour, Lorraine is thrown down a flight of stairs, shot at, stabbed and repeatedly punched. Much of it is shot in a single, excruciating take that leaves Theron’s character and one of her assailants gasping for breath and struggling to stand upright. It’s a technical marvel. It’s also a marvel if you can watch it without cringing.

Director David Leitch got the job by championing this blunt approach. It had worked for him on 2014’s John Wick, starring Reeves as a vengeful assassin. Leitch’s wife Kelly McCormick (one of Atomic Blonde’s producers) encouraged him to do the same with Theron, whose production company optioned the Cold War story some seven years ago. Most directors are reluctant to show women with black eyes, let alone being hit. So they pit female heroes against female villains, or pretend petite women can flip 200-lb. men, or simply cut away during fight scenes.

Leitch argued there was no reason to “make allowances for the fact that she’s a woman.” Adds Leitch, “For me it’s more compelling to be with her while she’s suffering.”

Theron agreed. “It’s a disservice to women. Part of it is male filmmakers not being comfortable with putting a woman in that position,” she says. “If a female spy is sent into the field, why wouldn’t she experience the same sh-t as a male spy?”

Before filming began, Theron spent four hours a day training at the gym Leitch founded with his John Wick co-director, Chad Stahelski. They concentrated on realistic moves a woman could actually use against a 6 ft. 4 in. opponent. “There’s a lot of roundhouse, low leg kicks and throat chops and elbow strikes,” the director says. “Elbows and knees are really big for generating power and leverage for a smaller attacker.”

That’s not to say Atomic Blonde doesn’t indulge in some fantasy. Lorraine’s garter belts, tight sweaters and white pleather coat that the actor likens to “a shiny condom” were inspired by the work of German photographer Helmut Newton. The film’s vision of a crumbling East Berlin still manages to be glamorous, with its cast of sexy, unhinged spies, including James McAvoy as another British agent who has “gone native.” He struts around Berlin, to the tune of “99 Luftballons” and “Blue Monday,” in a fur coat and stunner shades.

And then there’s the scene in which Lorraine seduces a fellow female spy (Sofia Boutella), originally a man in the graphic novel. It’s Bond-like: there’s no falling in love, just falling into bed.

“Some reviewers said, ‘The sex scene is too aggressive.’ I don’t want to be crass, but it’s not a lovemaking scene. It’s two people getting it on,” says Theron. “When we say we need to own our sexuality that means everything about our sexuality. It made me realize we have to push even harder to overturn old ideas of what women should act like in these movies.”

We used to get about one female action hero per year. If we were lucky, we got one icon per decade: Ellen Ripley in Alien, Sarah Connor in Terminator, the Bride in Kill Bill. Sigourney Weaver, who arguably brought the first female action hero to life in Ripley—a part, by the way, originally written for a man—says that roles for women have improved greatly.

“There isn’t that thing that used to drive me crazy whenever I read the part: those scenes where the woman stops being effective and has a little breakdown to show you she’s still a female entity,” she says. “Now, they just get on with it.”

After all, there’s no one way to be a hero. Because Lorraine isn’t Wonder Woman, who isn’t Sarah Connor, who isn’t Ripley. “I’m trying to break these forms of how women ought to behave in movies,” Theron says. “Maybe they shouldn’t behave at all.” 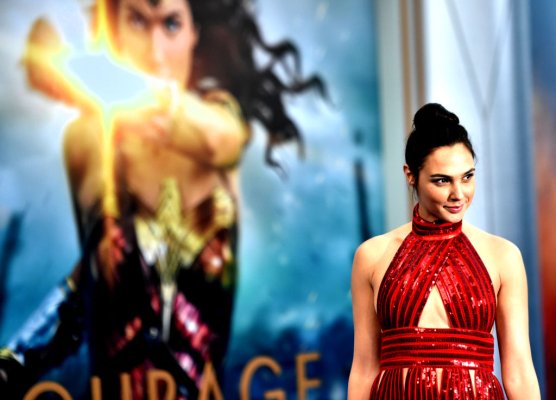 Wonder Woman Sequel Slated for December 2019
Next Up: Editor's Pick