Warning: This post contains spoilers for Season 7 of Game of Thrones

Nobody said it would be easy to cure greyscale, the fictional condition from which Game of Thrones characters shrink in fear. Highly contagious and characterized by a gradual hardening of the skin that eventually turns sufferers into “stone men,” the disease is almost always fatal and causes insanity in its later stages. Those who show signs of greyscale are often exiled to live out their days in quarantine, but the careful surgical work performed at the Citadel by Samwell Tarly on Jorah Mormont on this season of Thrones has shown that sufferers can live to tell the tale.

The idea of exiling people who suffer from a skin-related condition to a far-away and terrible place is likely to make viewers think of leprosy, which remains one of the most famous diseases associated with the Middle Ages, the real-world historical period on which Game of Thrones often draws.

While it’s easy to see why the fictional condition might be linked to the real (but medically very different) disease, recent scholarship reveals that many of the popular ideas that have endured about leprosy aren’t quite accurate. The real history suggests that, if greyscale and leprosy are in fact analogous, Sam’s decision to attempt to treat Jorah would have been more fully in keeping with his role as a healer than the Archmaester’s reaction would suggest.

The key question is how ostracism fits into the history of leprosy in Europe. Thanks in part to biblical injunctions that command those with leprosy to dwell outside the main camp — even though some scholars now believe that those words don’t actually refer to the specific infection — leprosy in Christian societies has long been linked to separation of some sort. But, as Elma Brenner of the University of Cambridge explored in a 2010 paper in the journal History Compass, research has challenged the “predominant view” that sufferers in medieval Western European society were “excluded and stigmatized” the way the show’s “stone men” are.

For one thing, Brenner explains that, though leprosy was certainly present in Western Europe before the medieval period, it wasn’t until after a 14th century wave of plague swept Europe that people at the time began to really worry about sick people spreading their illnesses. And, though leprosaria — hospitals or group homes for people with leprosy — were usually placed just outside the boundaries of cities and towns, they were not actually all that separate. Especially through charity and religion, leprosaria were part of society. Even after early ideas about contagion became common, people with leprosy were often allowed to come and go from the leprosaria where they lived. As for the infamous “clapper” noisemakers that are often associated with leprosy, and which have been long seen as a way of warning people to stay away, they may actually have have served the opposite purpose: attracting those who might give charity.

As Luke Demaitre put it in the book Leprosy in Premodern Medicine: A Malady of the Whole Body, though “[incurability] was the ultimate characteristic of leprosy, and its most constant attribute from late antiquity into the twentieth century,” there is evidence that people with leprosy were not seen as beyond treatment. Rather than abandon patients to their inescapable fates, healers — whether trained physicians, quacks or religious leaders — attempted to treat patients or at least make them comfortable.

Even after quarantine became a more common idea — something that the scholar Jane Stevens Crawshaw traces to the post-plague period in Italy — it was not synonymous with ostracism. Rather, she argues that people with leprosy, especially those without money to pay for expensive personal doctors, would often bring themselves voluntarily to leprosaria. After all, that was where care was most accessible. And as plague-related quarantine regulations took hold, the epidemic of leprosy in Europe was already on the wane. There are exceptions (in periods of societal crisis, especially later in the Middle Ages, authorities might enforce mandatory quarantine) and life wasn’t easy for those with leprosy, especially after ideas about separation spread. In some places, laws barred those with leprosy from inheriting property, for example. But overall, more recent historical work debunks the idea that complete exclusion from society was the dominant response to leprosy.

So why is still common to believe that people with leprosy were banished?

One argument, from scholar Carole Rawcliffe, is that the idea was promoted in the 19th century by people — scientists, governing authorities and religious leaders alike — who were looking back at the Middle Ages through the lens of their own time. As Rawcliffe posited in a 2012 lecture on the topic, several factors could have converged to lead to this “leprophobia.” For one, doctors in the late 1800s mistakenly came to the conclusion that the disease was far more infectious than it really is. Secondly, as colonialism spread, Western leaders who encountered the disease in the colonies came to fear that leprosy, which had tapered off in Europe, would return in force. They misread the medieval evidence to show that the segregation of the sick was a common and effective tack to take, Rawcliffe argues, and that interpretation conveniently meshed with their own 19th-century ideas about germs as well as their interest in forcing the segregation of the sick.

Whatever the origins of the misconception, experts see correcting it as crucial. After all, though medical understanding of leprosy has advanced significantly, the bacterium that causes it does still exist. And, though the condition no longer has to be fatal, stigma and ostracism remain major barriers for those who are dealing with what is now known as Hansen’s disease.

But the medical side of things isn’t the only reason to look to leprosy in relation to Game of Thrones. As the saga is, after all, just a story, the social and symbolic history history of the disease is perhaps where the comparison holds up best.

In medieval literature, says Robert Rouse, who teaches the subject at the University of British Columbia, leprosy is a disease with heavy connotations. Generally, in the context of Christian morality tales, disease was often linked to sin. And, as a hold-over from classical traditions, leprosy in particular was linked to Venus and thus to venereal sins. In stories like the Middle English romance Amis and Amiloun or the 15th century Scottish The Testament of Cresseid, leprosy is visited on characters after they commit acts of betrayal. The disease is, Rouse says, a sort of “shorthand” for medieval poets to quickly communicate something to their readers about a character’s morality.

But this idea that someone with leprosy has committed a sin isn’t mutually exclusive with the more recent research that suggests people with leprosy were not separated from society as much as we may think. In fact, being tested with something like leprosy, as Job was tested, could actually increase a person’s spiritual standing. Even the drastic-sounding 13th century “Mass of Separation,” which effectively declared a person with leprosy to no longer be alive in the eyes of the community, doesn’t mean people with the disease were sent away from society. Such an interpretation, Rouse points out, reflects a lack of understanding of a medieval Christian mindset. In the Middle Ages, the idea that a person with leprosy had moved on from temporal life to a kind of purgatory, in which they were “already paying for their sins,” would have a very specific and not necessarily negative moral meaning. Moreover, though modern society tends to put death out of sight, in medieval Europe that was not the case.

Rather than send them away, sinners and their possible salvation could be a focal point for society.

And Jorah Mormont? He contracted greyscale after breaking an oath to the woman he loves, and now, thanks to the cure, has renewed hope of redeeming himself rather than facing a lifetime in exile. The idea of that salvation sounds like something he could appreciate. 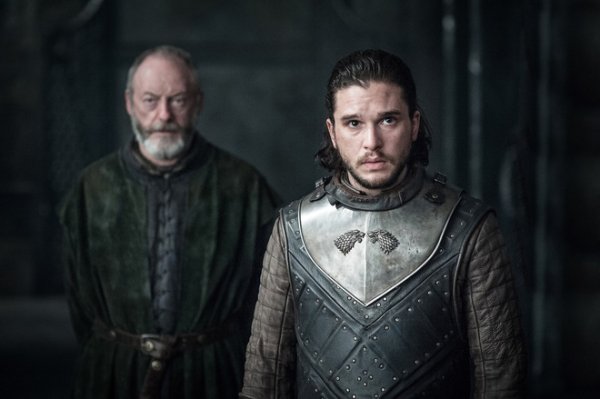 The Clues About Jon Snow's Real Parents You May Have Missed on Game of Thrones
Next Up: Editor's Pick