North Korea threatened to launch a nuclear strike “at the heart of the U.S.” if it sees signs that Washington is trying to remove Kim Jong Un as the country’s leader, according to South Korea’s Yonhap news agency.

“Should the U.S. dare to show even the slightest sign of attempt to remove our supreme leadership, we will strike a merciless blow at the heart of the U.S. with our powerful nuclear hammer, honed and hardened over time,” the state-run Korean Central News Agency (KCNA) reports, citing a spokesperson of the North’s foreign ministry.

Pyongyang’s warning follows comments by CIA director Mike Pompeo last week that hinted that the U.S. might be interested in seeing some form of regime change.

“It would be a great thing to denuclearize the peninsula, to get those weapons off of that, but the thing that is most dangerous about it is the character who holds the control over them today,” Pompeo told the Aspen Security Forum on Thursday, reports CNN. He went on to say that the most important thing the U.S. administration can do is, “separate capacity and someone who might well have intent and break those two apart.” Though Pompeo later denied that he was talking about removing Kim Jong Un.

Pompeo’s words went “over the line,” KCNA said, and show that toppling Kim is “the ultimate aim of the Trump administration.”

U.S. authorities have expressed increasing concern over North Korea’s advancing nuclear and missile program, particularly following Pyongyang’s successful test-launch of an intercontinental ballistic missile earlier this month. A report by the Defense Intelligence Agency suggests that North Korea could have an ICBM capable of carrying a nuclear weapon as early as next year, two years earlier than previously thought, according to the Washington Post. 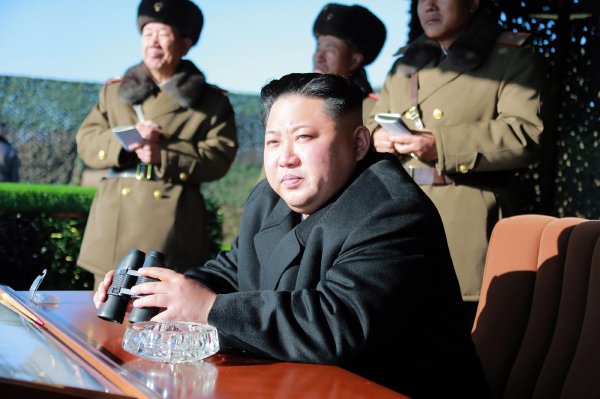 The Time for Negotiations With North Korea Is Now
Next Up: Editor's Pick