Ideas
By Patrick N. Theros
Patrick N. Theros served as U.S. Ambassador to Qatar from 1995-1998 and is currently President and Executive Director of the U.S.-Qatar Business Council.

The confrontation between Qatar and its three immediate neighbors has hit a wall. Efforts by Secretary of State Rex Tillerson, ably supported by Secretary of Defense James Mattis and Senate Foreign Relations Chairman Bob Corker has partly offset the President’s early ardent support of Saudi Arabia and its friends. The likelihood of President Trump overruling his Secretaries of Defense and State seems increasingly remote.

Absent a Washington surprise, the current measures against Qatar will not force Doha to cave. Closing air, sea and land access to Qatar caused only temporary pain. More than 90 percent of what Qatar imported from its neighbours were goods in transit from other suppliers. Qatar surprised observers — and perhaps even its own people — at the apparently seamless manner by which it found alternative routes and sources for everything it imports. It may cost more, but it works. Even if the crisis is soon resolved, most Qatari entities will prefer to make the new flows permanent rather than again become dependent on their neighbors. Similarly, Qatar’s Central Bank found workarounds to counteract attempts by the UAE financial sector to disrupt Qatari riyal transactions. In short, all else remaining equal, Qatar should be able to sustain the new state of affairs indefinitely into the future.

What next? The signing of an agreement between Qatar and the United States to fight terrorism financing put that particular ball into the neighbours’ court. Qatar can reasonably insist the others sign the same agreements with the United States. Saudi Arabia will find that an impossible condition, if past performance is any indication. Reducing the 13-point ultimatum to six slightly vaguer demands does not appear to have fazed Doha, while world opinion remains mesmerized by the original impossible set of demands.

The neighbors have few options to change Qatar’s calculations. Direct military force would bring catastrophic consequences for all. Imposing a naval and air blockade would be as dangerous. It would run the risk of direct confrontation with Iran, not to speak of the disruption of vital natural gas deliveries worldwide. Would they be desperate enough to attempt to assassinate the current leadership in Qatar? Surely not; even if successful, the neighbours would suffer huge international opprobrium — without any certainty that the Al-Thani family would find a new ruler more amenable to surrender.

The neighbours also have few economic options for turning the screws. Stopping existing imports of Qatari natural gas to the UAE and Egypt would hurt those countries, while Qatar Petroleum and its partners could easily find other markets. Withdrawing UAE and Saudi deposits from Qatari banks would hurt liquidity but only for a short time. With $40 billion in Central Bank reserves (not counting gold holdings) Qatar can easily sustain the riyal peg without need to touch Qatar Investment Authority’s $300 billion plus in foreign assets. The full-throated but poorly disguised smear campaign, launched by the new “Saudi Arabian Public Relations Committee” in the U.S. has done more damage to the reputation of the neighbors than to that of the intended victim.

The UAE, in the meantime, realizing that depriving its sports-crazed citizens of televised international soccer games was a dangerous step too far, quietly decided to allow BeIN, the Aljazeera-owned worldwide sports channel, an exemption from the general embargo on the parent company. This gesture to sports fans notwithstanding, the leadership in Abu Dhabi and Riyadh have boxed themselves in. Concessions at this stage would damage national amour propre to an unacceptable degree.

Without a dramatic game-changer, this stand-off will persist into the indefinite future. However, Riyadh needs a solution. The attempts by the Saudi leadership to reform the country’s economy created resentment among those who benefit from the existing system. The military adventure on Yemen has turned bad. Now the regime faces the potential embarrassment of failing to bring a tiny country, which the Saudi leadership view with ill-disguised contempt, to heel.

As of this writing, the only way out of this impasse remains the proposal by U.S. Secretary of State Tillerson. The question of terrorism financing can be resolved through bilateral arrangements between the U.S. and the GCC countries. Other issues need to be resolved through quiet mediation and negotiation, while all parties find a way to issue statements grandiloquent enough to let them stand down, while still claiming victory. 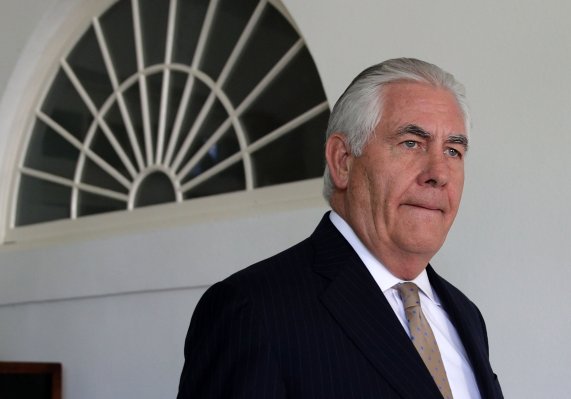 Tillerson to Visit Kuwait Amid U.S. Concerns over Gulf Dispute
Next Up: Editor's Pick