The Elder Scrolls games have arguably the strongest claim on the mantle of the fantasy gaming tradition Gary Gygax and Dave Arneson’s Dungeons & Dragons kickstarted in the 1970s. You might say a game like The Elder Scrolls Online was thus inevitable: a sprawling multiplayer-only opus that brings the series full circle.

You see, The Elder Scrolls: Arena, released in 1994 (and which wasn’t originally supposed to be a roleplaying game at all), was the first and last game to offer access to all of Tamriel, the continent on which all the action’s happened to date. Tamriel has nine provinces, and you could visit all nine in Arena — a game that boasted over two million square miles of explorable turf. Nothing else came close to that boast in 1994, though most of that turf was randomly generated and forgettable.

Subsequent Elder Scrolls games increased each province’s granularity, but at a cost, trading sweeping tracts of random-spawned terrain for smaller swathes of hand-sculpted geography. The other compromise involved throwing up arbitrary barriers, like the water surrounding Morrowind’s island of Vvardenfell, or Cyrodiil’s invisible walls bordering its six adjacent provinces and turning you back.

The Elder Scrolls Online dispenses with those barriers and resurrects Tamriel as a continuous continent, all of its provinces plumbable, from Skyrim to Elsweyr and High Rock to Black Marsh (though some of the world remains locked at launch, for the sake of expansion content). The game lets you play as a Dragon Knight, Templar, Sorcerer or Nightblade, squaring off against a demon prince named Molag Bal — referenced in prior games, but the primary antagonist here and threatening to pull Tamriel into his other-dimensional realm.

I posed the following questions to Matt Firor, ESO‘s director and one of the lead designers on Dark Age of Camelot, the most warmly received MMO in the post-Everquest run up to Blizzard’s World of Warcraft. ESO launches today for PC and Mac, and runs $15 a month (after a free 30-day trial period).

How geographically close do you hew to the cartographic arrangement of the provinces in prior Elder Scrolls games? Will Morrowind, Cyrodiil and Skyrim — the three most concretely defined areas to date — be discernibly similar, topographically?

Yes, we stuck as close as we could to the original heightmaps for areas of Tamriel that have featured prominently in other Elder Scrolls games. As we expand the game’s geography, and begin to fill in blank spots on the map, we’ll continue to do this. We also updated those areas’ ruins, flora and fauna — mushrooms in Morrowind, Ayelid ruins in Cyrodiil, etc. — to be immediately recognizable by gamers familiar with those classic titles.

Tell us a little about the quest system and what you’ve done to mitigate the sense of box-checking genericness that plagues most MMOs.

Good quests begin and end with a good story. If you care about the characters you are helping or the mystery you are solving, then the quest works. This is a game content design mantra, not just confined to MMOGs. With fully voiced NPCs and a really strong writing team, we made sure that when you are questing that you care about what you are doing, which makes the whole quest interesting and fun.

Combat was arguably one of the weakest aspects of Skyrim, and in my view, it’s been a problem point for all of the Elder Scrolls games (to say nothing of its click-slavishness and physical disconnectedness in most MMOs). How different is combat in ESO?

I suppose this is subjective — I really like the combat system of Skyrim and Oblivion and we used the combat control system from those games as the foundation of the ESO combat system. But we have a much different A.I. system in ESO, as it is a multiplayer virtual world. Our world has a constant population of respawning enemies, so the main differences come from being able to deal with enemies behind you and multiple enemies at the same time.

More recent MMOs have been figuring out how to fold event spontaneity into their exploration/loot hunt/leveling games. How dynamic and mutable is ESO (as opposed to scripted) as you move through the world?

We have a couple of different types of spawning content in the world. We have our Dark Anchors, which are large-group-based open world encounters where you and your friends take on allies of the big bag guy, Molag Bal. We also have miniature versions of those (Dark Fissures) that are solo-able as well as other randomly spawning encounters at various points around the world. When you add that to the exploration content we have (treasure chests, skyshards, mini-dungeons, etc.) as well as our really in-depth questing system, there’s a ton to do in the game.

Let’s talk music. We’ve been saturated with composer Jeremy Soule’s scores for three sprawling Elder Scrolls games. How did composers Brad Derrick and Rik Schaffer approach this game? Given the time shift, are we in the same thematic ballpark as Morrowind and Oblivion and Skyrim, or a noticeably different one?

Both Brad and Rik have written and managed the scores of many games between them, so they had the experience to find the right tone for the high-fantasy orchestral score. Jeremy’s work does make a cameo – he composed the track “For Blood, for Glory, for Honor.”

We also had Malukah write and perform bard songs for the game, which are amazing – you can hear them just about any time you walk into a tavern in the game. But yes, overall, even though we’re at a different period of time with ESO than Skyrim or Oblivion, it’s still in the same high fantasy ballpark.

Style-wise, ESO‘s interface most strongly resembles Skyrim’s minimalist approach, which some players loved and others hated. Can you talk a little about the things that inspired ESO‘s interface in that light?

It wasn’t so much copying Skyrim’s interface as it was trying to build on one of the most important parts of Skyrim: Moment to moment gameplay is about looking at the world, not at the UI. The compass is small and unobtrusive, but tells you what you need to know, enemies in the game give you “tells” that you respond to instead of buttons flashing on the button bar, etc.

What’s the mini-game and achievement hunt like? I assume there’s an exploration mini-game?

There are several. Every zone has tons of achievements (every quest, every explorable area, every dungeon, all dungeon bosses, etc.). There are also skyshards which, if you find enough of them, give you extra skill points. There are also chests to find — complete with a lockpicking minigame — that can give you some pretty good loot, especially if those chests are found in dungeons. Every time you find an area on the map that has something interesting, you get experience, so just walking around the world will help develop your character.

How interesting do you feel you’ve made the nooks and crannies and null space? How bored (or not bored) do you think players are going to get exploring dungeon #1 versus dungeon #159?

Our dungeons, designed for groups of four, have really interesting stories that drive the player to (and through) them, so the first time you go through it, it feels like just more awesome questing. Dungeons are filled with chests, books, barrels, crates, and traps to keep players busy while exploring and fighting.

If you want to do multiple dungeon runs, obviously then you focus on the loot, which is better in dungeons than in the overworld, and you are always guaranteed good stuff from the boss and mini-bosses.

One particular thing that should be pointed out is the attention to detail on boss encounters in dungeons. Every boss is a hand-crafted encounter with unique abilities for groups to learn and overcome. With over 18 normal dungeons and 6 Veteran dungeons at launch, that’s a lot of boss encounters. Speaking of Veteran dungeons, these 50+ dungeons provide a second challenge or story to the “normal version” of that dungeon. It is a new quest with new areas and all new enemies.

ESO has a huge advantage over other startup MMOs in that it’s built on a successful franchise, but how are you handling sustainability post-launch? What sort of content rollout schedule should players expect?

We have been working on post-launch content for many months now – our first post-launch package, Craglorn, is our first Adventure Zone. It introduces Trials, a large-group competitive PvE endgame, four-man Veteran Dungeons, a Death Recap screen so you can see who or what killed you, and an entire overworld designed for groups. While the content packages we have will range in feature sets, Craglorn illustrates the kind of commitment we have to providing regular content to our players. Over time, you’ll get new systems, new zones, new quests, stories, and lots more.

Do you worry that at some point the whole swords-and-sorcery theme wears out its welcome? That after all the crazy time players put into Skyrim, they’ll bounce sooner in ESO?

These things wax and wane, but there’s always room for a good fantasy, whether that’s a game, book or movie. It’s been over two years since Skyrim launched, so there has been plenty of time for gamers to get their Tamriel appetite back! 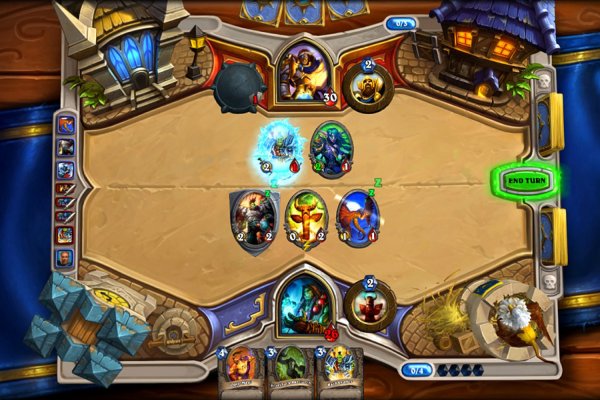 Blizzard Pushing Hearthstone Out for iPad, Where It Probably Belongs
Next Up: Editor's Pick