The Cheapest Last-Minute Ways to Catch the Total Solar Eclipse

A total solar eclipse will soon paint a diagonal strip of the United States in complete darkness — and some of the best free and cheap ways to watch it are still available.

Following a path from Salem, Ore., to Columbia, S.C., the total solar eclipse on Aug. 21 will be the first one visible from coast to coast and only in the U.S. in the country’s history. Hundreds of towns, cities and states have planned celebrations and events to commemorate the historic event. And camping sites, Airbnbs and hotels that sit on prime viewing real estate along the path of the eclipse are cashing in — with even some parking spots going for upwards of $100.

A solar eclipse happens when the moon passes directly between the Earth and the sun. That movement creates a shadow that makes portions of the Earth dark — a rare phenomenon. Certain areas are submerged in total darkness during the eclipse, what’s known as the path of totality. In this case, all of North America will be able to see a partial solar eclipse, while parts of more than a dozen states will see totality for about two minutes, depending on the area, as shown on this map.

With just a couple weeks left before the eclipse, here are some of the best places to watch the solar eclipse that are still available for last-minute viewers who don’t want to break the bank.

One of the best cheap places to watch the total solar eclipse in Oregon is the small town of Madras, which has spent the last two years preparing for this eclipse. The city, which is about a two-hour drive from Portland, is expecting 55,000 to 75,000 people to come to town for the cosmic event — and this for a town with a population of just 6,700.

Unlike some other destinations preparing for the eclipse, Madras still has some camping sites and “daytripper” sites available. For those interested in heading to Madras for just a day, “daytripper” spots available at a number of parking lots in the town cost between $25 and $75. If you’re hoping to stay a bit longer, privately run camping sites are still available, starting at $400.

The total eclipse will start in Madras at 10:19 a.m. local time and last two minutes and two seconds.

To watch the solar eclipse for free in Idaho, check out the Craters of the Moon national monument, which is hosting an event in Arco. There’s no limit to how many people can attend, and parking spots are available free of charge. There will also be free eclipse-viewing glasses.

Arco is about a three-hour drive east from Boise, and an hour-long drive west from Idaho Falls, Idaho. In addition to several days of activities planned to celebrate the eclipse, USC engineering students are partnering with NASA to launch a high-altitude balloon that will capture a livestream of the eclipse. The balloon will launch about an hour before the eclipse starts.

The viewing event will be held just north of the national monument. The total eclipse in Arco will start at 11:31 a.m. local time and last less than two minutes.

The town of Casper, Wyo. is hosting a festival to celebrate the eclipse that is free to the public. The city will have a number of free viewing parties on Aug. 21, as well as events throughout the weekend leading up to it.

For people driving in for just the day, Casper will have a variety of parking options available — including free spaces and some that cost up to $300. Some of the parking accommodations will provide food and beverages as well. For those looking to make a longer trip, there are still hotel rooms and Airbnbs available in Casper and the surrounding area.

The total eclipse in Casper will begin at 11:42 a.m. local time and last almost two-and-a-half minutes.

The small town of Alliance, Neb., is offering a number of free or cheap viewing options.

Interested visitors can make reservations for their cars at local parking lots. One of the more unusual spots to view the eclipse is at Carhenge, an artistic sculpture made out of 39 cars that emulates Stonehenge in England.

The total eclipse in Alliance will start moments after 11:49 a.m. local time and last for about two-and-a-half minutes.

One of the best free places to see the eclipse in Missouri is in the city of St. Joseph, which will experience one of the longest moments of total darkness — about 2 minutes and 38 seconds. As a result, the city has created a number of free viewing spots for residents and visitors to see the historic event.

Less than an hour-long drive from Kansas City, St. Joseph still has hotels available for anyone looking to stay longer than a day trip.

The Lands Between the Lakes National Recreation Area, a peninsula of more than 170,000 acres in western Kentucky and Tennessee, will provide space for people to view the solar eclipse free of charge.

At just under a two-hour drive from Nashville and Bowling Green, Ky., the park can host visitors for the day or campers for multiple evenings. While every camping site is reserved, there are “basic and dispersed” camping sites available in the forested areas of the recreation site that take walk-ins. Interested campers would still have to purchase a permit to camp there online before heading to the park, said Janice Wilson, who works at the recreation area.

The total eclipse at the park will begin moments before 1:23 p.m. local time and last for a little more than two minutes.

Southern Illinois University in Carbondale, Ill., has hit the jackpot. In addition to falling under the path of totality this time, the city and university will fall under it again when the next solar eclipse hits the U.S. in April 2024.

The total eclipse will hit Carbondale this year at 1:21 p.m. local time and last for 2 minutes and 20 seconds.

The Blue Ridge Parkway, dubbed “America’s Favorite Drive,” also falls in the path of totality. Along the parkway, there are a number of overlooks where drivers can stop to see the eclipse for free. The National Park Service anticipates these overlooks will fill up quickly, so get there early.

Additionally, those looking to get some exercise can hike up popular summits like the Black Balsam Knob, Devil’s Courthouse or Waterrock Knob to catch a glimpse of the darkness.

The total eclipse at the southern section of the parkway near Asheville, N.C., will begin at about 2:36 p.m. local time and last between 20 seconds and 1 minute.

One of the best last-minute places to see the total solar eclipse is Columbia, S.C., which boasts the longest viewing of the total eclipse on the East Coast and is hosting more than 100 events to celebrate. There will be 10 free viewing stations at the University of South Carolina and four free viewing spots at different parks in the city. The city will also be handing out 100,000 pairs of free eclipse-viewing glasses.

The total eclipse in Columbia will begin at 2:41 p.m. local time and last for about two-and-a-half minutes, depending on where viewers are in the area. 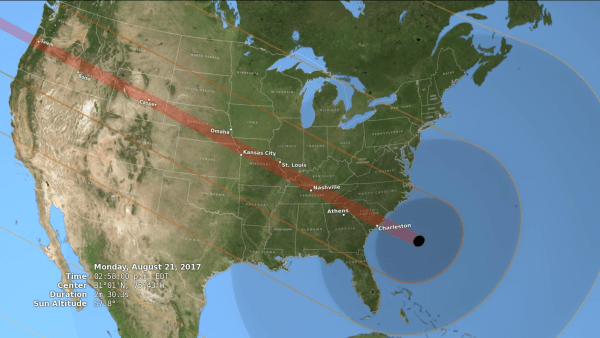 See NASA’s Most Detailed Map of Where the Total Solar Eclipse Will Be
Next Up: Editor's Pick