What Time Is the Solar Eclipse Today?

On Monday, Aug. 21, the contiguous U.S. will experience a total solar eclipse for the first time since 1979. The eclipse, which occurs when the moon passes directly between the sun and the Earth, will cross the country from the West Coast to the East Coast, leaving portions of 14 states momentarily immersed in darkness. Even those states that don’t see a total eclipse will experience a partial eclipse, which occurs when the moon only blocks a portion of the sun, a phenomenon that can last for about two or three hours.

The total solar eclipse will cover an area that is about 70 miles wide and will move diagonally across the country from Oregon to South Carolina. While the map of the eclipse’s path of totality touches 14 states, it clips a few very narrowly. This leaves just 10 states — Oregon, Idaho, Wyoming, Nebraska, Missouri, Illinois, Kentucky, Tennessee, Georgia, and South Carolina — that will get a good view of the total eclipse, as long as the weather cooperates, according to NASA.

Find out what time the eclipse will be visible in each of those states below:

Sky gazers in Lincoln Beach, Ore. will be the first to see the solar eclipse, starting at 9:05 a.m. PDT. The time totality begins there is 10:16 a.m. PDT.

The eclipse in Carbondale, Ill. begins at 11:52 a.m. CDT. The time totality begins is 1:20 p.m., leaving the sun completely covered for two minutes and 40 seconds — its longest duration, according to NASA. The eclipse will be over there by 2:47 p.m. 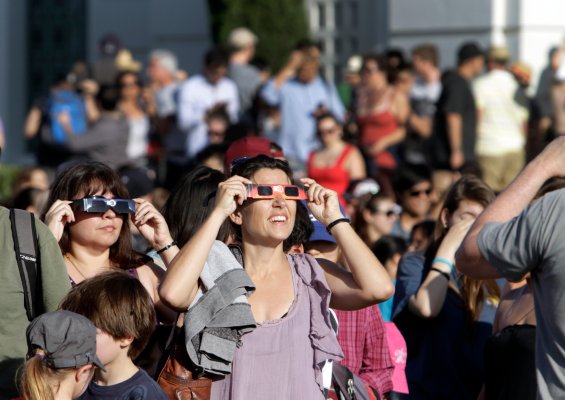 The Cheapest Last-Minute Ways to Catch the Total Solar Eclipse
Next Up: Editor's Pick