'Minecraft' for Nintendo Switch Is About to Fix a Tricky Problem

Minecraft for the Nintendo Switch is about to catch up to the PlayStation 4 and Xbox One in a major way. The sandbox game’s console version curators says they’ve figured out how to solve a vexing launch issue, and the next update (due imminently) will allow the game to run at 1080p while perched in its TV-connected cradle.

The game currently runs at one resolution when docked and another when decoupled and played in handheld mode. This was cause for some understandable grumbling when it arrived in May. The PlayStation 4 and Xbox One versions each run at 1080p, or 1920-by-1080 pixels, while the Switch version runs at 720p, or 1280-by-720 pixels, on the TV.

Read more: Minecraft for Nintendo Switch Is the Best Version Yet

If you play the game in survival mode, this is a minor thing. You’re down in cramped, largely darkened mineshafts, your view of the world smashed into orthogonal surfaces divvied into blocks roughly the size of cubits. You don’t need high edge-of-object fidelity. But clamber out of the game’s caves and dungeons, climb a hill and look out a ways, and you’ll sometimes wonder whether that distant blotch of white is a sheep or just an oxeye daisy, a slime or a creeper. I exaggerate, but things definitely get janky in Minecraft when you’re scanning distances at 720p.

Most assumed that 720p lock was because the Switch isn’t as powerful as its peers, and had to be resolution-throttled. Not so, said Microsoft, telling TIME the reason involved “issues currently experienced shifting from one resolution to the other when docking/undocking.” The company said 1080p might be possible, though it couldn’t promise the game would hit 1080p docked down the road. Now we know they weren’t kidding, and that the game loses none of its 60 frames per second fluidity despite an order of magnitude output leap, from 921,600 to nearly 2.1 million pixels.

If you want to scan the rest of the patch’s change log (it’s mostly bug fixes), you can find that here. I assume all else remains the same, thus the draw distance is still going to be slightly lower than on the other consoles, you’re limited to “Medium” world sizes (3,072-by-3,072 blocks versus “Large,” which supports 5,120-by-5,120 blocks) and you don’t get the checkbox to create “Amplified” terrain. But I also assume most of those differences are going to vanish when, later this fall, Minecraft for the Switch transitions to the much more versatile and scalable “bedrock engine,” currently running on Windows 10, iOS and Android devices. 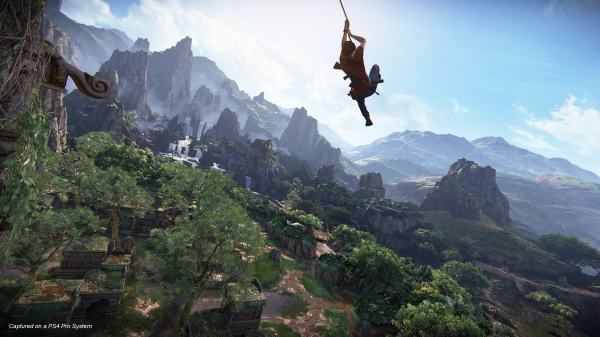 Uncharted: The Lost Legacy First Impressions
Next Up: Editor's Pick