Although we didn’t see the White Walkers in Sunday’s episode of Game of Thrones, the threat of the dead is definitely still looming.

Following the ominous sequence that appeared to show the Night King’s army marching south in the premiere, an eagle-eyed Redditor spotted a change in the show’s opening credits that seems to hint at how the Others will try to get past the Wall. When the map pans to the Wall and its surroundings, the water at the far eastern end now looks to be frozen over.

Of course, this is right around the location of Eastwatch-by-the-Sea — the castle that Jon Snow sent Tormund to guard and the Hound later appeared to see in the flames. “Ice, a wall of ice. The Wall…It’s where the Wall meets the sea,” he described his vision. “There’s a castle there. There’s a mountain, looks like an arrowhead. The dead are marching past, thousands of them.”

Some speculate this means the Night King has figured out how to freeze the sea and will attempt to pass the Wall by simply going around it. This argument is made more convincing by the fact that the line, “The waves are frozen,” was reportedly cut from the final version of the Hound’s premonition.

However, others think the magic imbued in the Wall will continue to keep the White Walkers at bay. But if the Night King’s mark nullified that magic when Bran crossed back over, it’s a whole different ball game.

By any means, the show seems to be setting up a major conflict between the living and the dead at Eastwatch. Keep your eyes on the map, Thrones fans.

“The Queen’s Justice,” the third episode of Game of Thrones‘ seventh season airs July 30 at 9 p.m. on HBO. 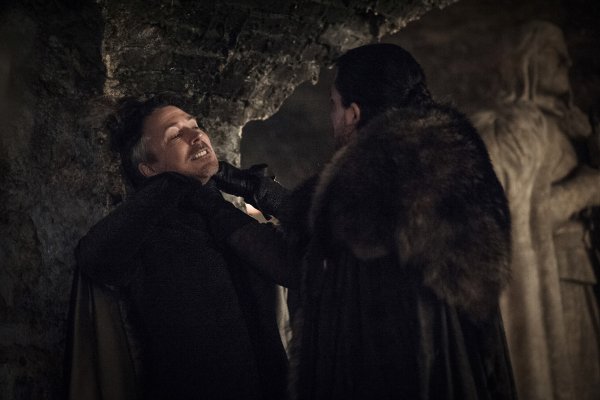 5 Crucial Game of Thrones Callbacks You May Have Missed
Next Up: Editor's Pick