In this Dec. 6, 2012, file photo, Liu Xia, wife of 2010 Nobel Peace Prize winner Liu Xiaobo, poses with a photo of her and her husband during an interview at her home in Beijing.
Ng Han Guan—AP
Ideas
By Marco Rubio
Rubio is a U.S. Senator for Florida.

While we have not had the occasion to meet, I join with millions around the globe in extending my deepest condolences on the loss of your husband, Liu Xiaobo. His decades’ long peaceful fight for human rights and the end to one-party rule in China earned not only international honors in the form of the Nobel Peace Prize, but also countless admirers, myself among them, who continue to stand in solidarity with his aspirations.

Even as there are discussions underway among policymakers in Washington, D.C., about how best to honor Liu Xiaobo’s life and legacy, there is a growing sense of urgency regarding your own plight. Few take at face value the Chinese government’s claims that you are free. This claim comes from the same people who have callously deprived you of nearly all contact with the outside world for seven years, forcing you to live in virtual isolation and under constant surveillance. Your illegal home confinement is a source of international outrage, especially given the fact that you’ve never had charges brought against you. Similarly, the Chinese government’s assertions that you are currently being “protect[ed]” from reporters, supporters and friends for your own good ring hollow given its shameful refusal to honor you and your husband’s wishes to seek medical treatment outside of China.

Many Americans and people around the world believe these and other injustices demand accountability. Current U.S. law gives the President of the United States the authority to impose visa bans and to freeze the assets of any foreign citizens who suppress basic human rights; surely the Chinese government’s treatment of you and your husband meets this standard. Other measures, including sanctions, can be brought to bear. I fear that if there is no price to pay for the Chinese government’s treatment of your husband, arguably China’s most prominent political prisoner, it will send a devastating message to thousands more like him, whose names we may not know but whose harassment, imprisonment, deprivation of rights, denial of medical treatment, torture in detention, and more, are daily realities.

News accounts of your late husband’s funeral service and cremation, the scattering of his ashes, and the Chinese government’s tightly scripted narrative surrounding these events, are further evidence of Chinese Communist Party’s fear of your husband and his legacy. Chinese officials’ refusal to allow for a gravesite was no doubt due to their concern it would serve as a pilgrimage site for protesters and sympathizers who yearn to see China as your husband envisioned it: democratic, free and respectful of the basic rights of all its people. Fortunately, the principles Liu Xiaobo embodied are not bound by time or place, and his dream of democracy in China cannot be extinguished, despite the relentless efforts of China’s censors.

Several obituaries and tributes to your husband have rightly noted his pivotal decision in 1989 to leave behind a fellowship at Columbia University in New York and return to China to join the blossoming pro-democracy protests in Tiananmen Square. What began as hopeful calls for change drawing thousands of Chinese citizens to the streets ended in bloodshed nearly 30 years ago, but the story did not end there. In the ensuing years, Liu Xiaobo’s moral leadership and political commentary — including through periods of detention and imprisonment — maintained the hopes of Chinese citizens in China and in exile who believe in freedom and political reform. His advocacy of free expression demonstrated his fierce support to critical and independent thinking. His leadership in drafting and enlisting signatories of Charter 08 showed his willingness to publicly voice his beliefs and inspire others. His exquisite poetry, in which he expressed his love and respect for you, revealed his depth of spirit and character. In his Nobel lecture delivered in absentia, Liu Xiaobo predicted that “China’s political progress will not stop, and I, filled with optimism, look forward to the advent of a future free China. For there is no force that can put an end to the human quest for freedom, and China will in the end become a nation ruled by law, where human rights reign supreme.”

I share his conviction. You and your family have paid a great price in pursuit of this end, but we must remember that history is not on the side of tyrants or oppressors. The “ash heap of history” is littered with authoritarian governments who could no longer suppress the universal aspirations of their people. Months after the Tiananmen Square Massacre, the Berlin Wall came down and with it the Soviet Union. The tides of history often move swiftly, and I pray for the day, in our lifetime, when Liu Xiaobo’s manifold contributions are properly recognized, and his dream realized, in the land of his birth. 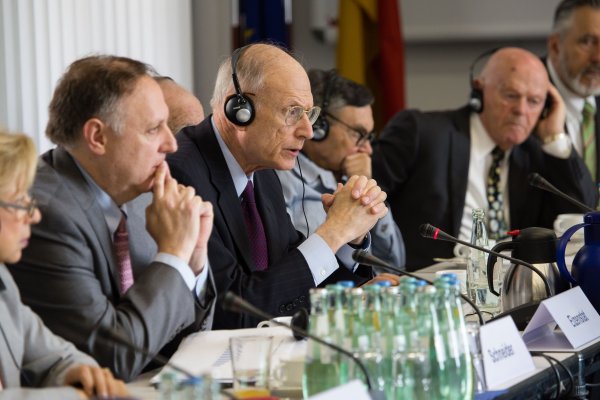