Both Microsoft and Google envision a not-so-distant future in which donning smart headgear to repair an elevator or assemble a tractor motor is the norm. Over the past several days, both tech giants have revealed they’re each taking concrete and compelling steps to make that happen.

Microsoft just revealed that it’s working on a new artificial intelligence chip to power its second-generation HoloLens headset. The coprocessor’s chief job will be implementing deep neural networks — a machine learning technique with a structure that loosely resembles the human brain — into the HoloLens’ core processing unit. A dedicated A.I. chip is necessary for a gadget like the HoloLens, says Microsoft, which must be able to comprehend large amounts of complex data gathered by its depth and camera sensors without latency. Microsoft hasn’t said when it will release the updated HoloLens headset, but speculation at this point has it arriving in 2019.

The announcement comes days after Google divulged new information about its plans for the next iteration of Google Glass. Its surprise informational salvo marks the first time the search giant has dished about the new version of Glass in development for the workplace, which it calls Google Glass Enterprise Edition. The refreshed model will offer faster, more reliable Wi-Fi connectivity, improved security, a faster processor, a sharper camera and longer battery compared to its predecessor.

Taken together, the announcements confirm that Google and Microsoft view technologies like smart headgear and augmented reality as strategically vital, particularly in the workplace. Google’s first stab at consumer-side smart goggles came in 2012 with its initial version of Google Glass. But privacy concerns, limited availability, boutique pricing and use-case haziness — to say nothing of the deeply creepy factor — ultimately produced a flop.

Both Google and Microsoft have apparently learned from Glass’s mistakes. Rather than marketing new versions of HoloLens and Google Glass toward thrill-seekers, fashionistas or photographers, both companies are focusing on applications in commercial scenarios. Google has tested Glass Enterprise Edition in some 50 businesses over the past two years, including companies like DHL, Sutter Health and Volkswagen. Microsoft counts Cirque du Soleil, Lowe’s and the PGA Tour among its clients, and recently expanded HoloLens availability to regions such as Australia, Ireland, France and New Zealand.

While the basic concepts behind HoloLens and Google Glass overlap, in execution they couldn’t be less alike. Google Glass is meant to be physically insubstantial like a pair of literal glasses, only noticeable when someone needs it for a specific task. It displays a small virtual screen above the wearer’s eye, which can be glanced at without disrupting other visual tasks. The new version is even friendlier, able to clip onto existing eyeglasses and rendering the technology more accessible for those who need prescription glasses or protective eyewear in their jobs (though it must remain in wireless range of a smartphone to work properly).

HoloLens, by contrast, is much more immersive, since it can display larger graphics that fall within the wearer’s field of view. And unlike Glass, it’s also a functionally holistic device, unconstrained by reliance on smartphone or virtual-reality-style computer tethers to operate. All of HoloLens’s necessary computing components are baked into the headset.

Note that none of these workplace-angled changes mean consumer-oriented versions of these headsets won’t follow at some point. For now, Microsoft and Google seem content to give the rest of us augmented reality by alternative methods. Google is developing smartphone-based augmented reality through its Project Tango technology, for instance, and Microsoft is working with PC partners like Acer and Lenovo to build cheap headsets that support Windows Mixed Reality — a version of Windows that runs a combination of augmented and virtual reality experiences. That said, these headsets must still be attached to a computer.

Given the cultural and technical challenges of cracking augmented reality’s consumer-side code, making enterprise deployment the next step for HoloLens and Google Glass is a sensible decision. Google Glass didn’t resonate because it couldn’t distinguish what it offered from simply pulling out your smartphone. Most of Glass’s perks — like first-person photos and videos — were novelties that couldn’t justify the Explorer Edition’s whopping $1,500 price tag. (Microsoft charges $3,000 for the developer edition of HoloLens and $5,000 for the commercial suite).

The situation reverses when you put Glass or HoloLens on an engineer or mechanic. Being able to see critical information at a glance, like how much torque should be applied to a wrench, or whether a new piece of equipment will fit in a medical facility’s operating room, both upends and streamlines workflow. The question then becomes whether HoloLens or Glass will eventually dominate the workplace, and whether supremacy in one domain can tee up success in another. 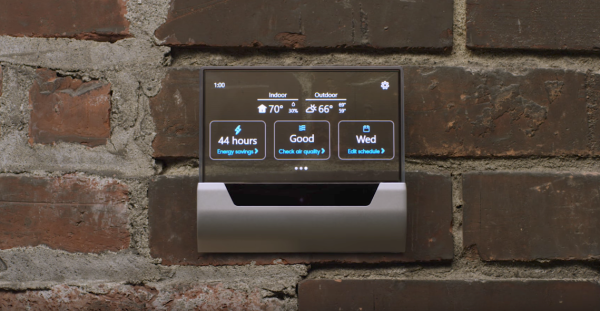 This Is Microsoft's Gorgeous New Nest Competitor
Next Up: Editor's Pick