'I Had No Improper Contacts.' Jared Kushner Speaks After Senate Meeting on Russia

White House adviser and President Trump son-in-law Jared Kushner said during a statement at the White House Monday, which followed a closed-door meeting with the Senate Intelligence Committee, that he did not collude with Russia.

“I did not collude with Russia nor do I know of anyone else in the campaign who did so. I had no improper contacts,” Kushner said during the 3-minute statement, without taking questions, reiterating the lengthy statement he provided to lawmakers on Monday. “And I have been fully transparent in providing all requested information.”

Kushner is one of a handful of Trump associates who have been roped into the ongoing investigation into the Trump campaign’s ties to Russia and the country’s intrusion in the 2016 presidential election. He is set to face questions from lawmakers again on Tuesday.

In a statement released ahead of the Monday meeting, Kushner sought to make clear that he had nothing to hide in the statement he provided to lawmakers, offering his side of the story on a number of reports. He disclosed details about interactions he had with Russians, including a meeting with the Russian Ambassador, a Russian banker, and a widely reported meeting he, Donald Trump Jr., and former campaign manager Paul Manafort attended with a Russian lawyer. Kushner claims to have not remembered the name of Russian Ambassador Sergey Kislyak in the immediate aftermath of the election. He also said that he found the meeting with the Russian lawyer to be boring and sought a way out.

At the White House, Kushner stuck to the same script. The White House adviser’s remarks were succinct — he gave a brief overview of the 11-page written statement he provided to lawmakers on Monday while signaling support for President Trump and the work they did on the campaign trail. Kushner also seemed to sow doubt on the overarching investigation into Russian interference, saying that Trump’s win was a result of anything other than his message does a disservice to those who voted for him.

“Donald Trump had a better message and ran a smarter campaign and that is why he won,” Kushner said. “Suggesting otherwise ridicules those who voted for him.” 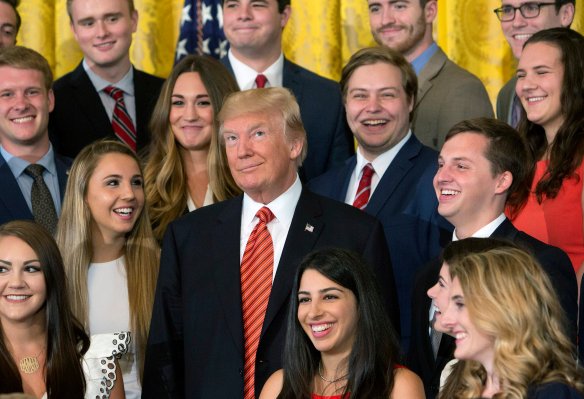 President Trump Was Asked If Jeff Sessions Should Resign. He Rolled His Eyes
Next Up: Editor's Pick