'We're Begging for Education.' Meet the Teacher Who Panhandled to Buy Her Class School Supplies

An Oklahoma teacher stood at a highway intersection panhandling for school supplies last week. She was surprised when she made $52 in 10 minutes and “overwhelmed” by the support she received online in the days that followed. But the interaction that affected her most was a young woman who approached her, donated her waitressing tips and said, “I’m alive today because of a teacher like you.”

“That just choked me up,” said Teresa Danks, a third-grade teacher at Grimes Elementary School in Tulsa, Okla., who set out to raise money for her classroom and send a message about education funding challenges that she thinks too few people understand.

Danks, 50, said she typically spends $2,000 to $3,000 of her $35,000 salary on classroom supplies each year. Recent budget cuts have worsened the financial burden on teachers, who are often tasked with purchasing their own classroom supplies. Oklahoma’s budget crisis has led to larger class sizes, textbook shortages and, in some districts, a four-day school week, the Washington Post reported in May.

“It’s just getting to the point where we don’t have anything else to cut,” Danks told TIME.

She stood outside last Wednesday with a sign that read, “Teacher needs school supplies! Anything helps.” She was hoping to draw attention to her need for supplies for art and science projects — beads, pipe cleaners, pom poms, googly eyes and paper towels — and then continue raising money online.

“I mean, they sound silly, but these kinds of things are what you need — paper towel rolls, toilet paper rolls, they make the good little rocket ships when we do our solar system study,” she said. “Most of these kids will never leave the city they live in or the rural community they live in, so teachers are trying to bring the world to them.”

“We certainly know — and I know personally from having been a teacher for many years — that it is unfortunately commonplace in our country for teachers to invest many hundreds of dollars or thousands of dollars in their classroom,” she said, adding that she took a second job at a pet store and later as a restaurant hostess to make money for her classroom when she was a teacher in Texas.

“We try to do what we can to make up for the lack of investment on the part of our state in our schools,” Gist continued, “and I’ll continue to advocate for that.”

After Danks’ brief panhandling stint, she posted photos of her effort on Facebook and created a GoFundMe page, which had raised $3,500 as of Monday afternoon — surpassing her $2,000 goal for her own classroom. Danks plans to continue raising money to give to other teachers in partnership with DonorsChoose.org, an organization that has raised more than $500 million to fund classroom projects for public school teachers across the country.

“I definitely am going to be pushing forward this movement,” she said. “I would love to see teachers across America standing out there with their signs, saying just that we’re begging for education.” 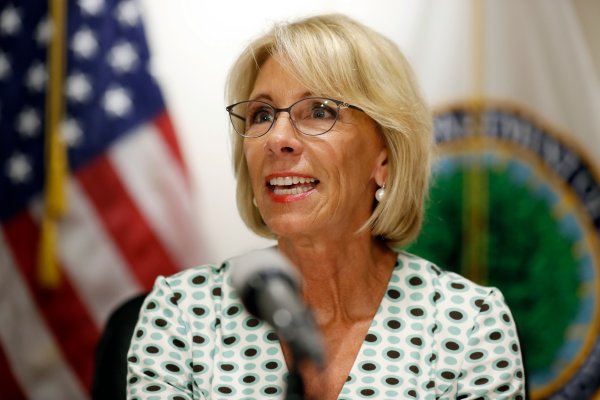 DeVos Defends School Choice After Hundreds Protest Her
Next Up: Editor's Pick