Venezuela's Opposition, and Its Famous Protesting Violinist, Vow to Fight On

Opposition forces in Venezuela are calling for a new wave of nationwide strikes this week, while President Nicolas Maduro insists on pressing ahead with an electoral process that detractors say would cement his grip on power.

This follows another round of skirmishes between protestors and government security Saturday in Caracas, during which masked demonstrators threw Molotov cocktails and rocks at police officers firing tear gas, the Guardian reports.

Among those injured is Wuilly Arteaga, a 23-year-old violinist who has risen to national prominence for playing tunes, including the Venezuelan national anthem, at protests even as they turn violent.

“Neither rubber bullets nor pellets will stop our fight for Venezuela’s independence,” the Guardian quotes Arteaga as saying. “Tomorrow I will be back in the streets.”

As he was sent to hospital for his injuries, a bandaged Arteaga could be seen still holding his violin, in a video he tweeted out Saturday.

Following a 24-hour strike across the South American country last week, the opposition Democratic Coalition is calling for a new round of nationwide strike on Wednesday and Thursday, according to the Guardian.

Despite the mounting protests, Reuters reports that the Maduro government is proceeding with plans to create a “constituent assembly,” a body that could rewrite Venezuela’s constitution.

Opponents of Maduro, who will be boycotting the assembly’s election later this month, have been vehemently opposed to the move, which they say could enable the president to bypass the opposition-controlled National Assembly.

Venezuela has been engulfed by months of increasingly violent and deadly protests since April. Demonstrators calling for Maduro’s resignation accuse him of sending the country’s economy in a nosedive. Maduro and his supporters, in turn, have repeatedly called the protests a conspiracy to topple an elected government. 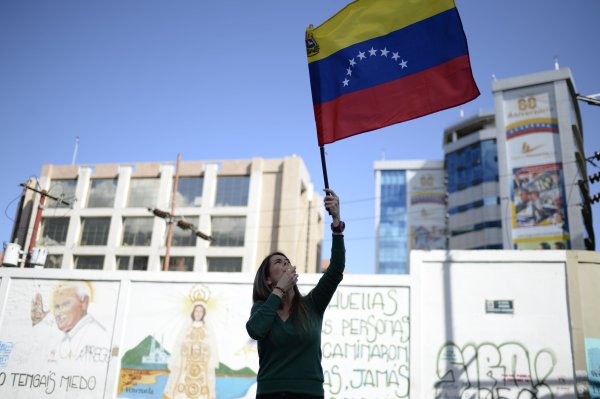