Prince William and Prince Harry have shared details of their final phone call with their mother Princess Diana before she died.

“I can’t necessarily remember what I said but all I do remember is regretting the rest of my life how short the phone call was,” Prince Harry said.

The two royal sons described the phone conversation in a new ITV News documentary about Princess Diana’s life and legacy 20 years after her death. The documentary will be released on Monday by ITV in Great Britain and HBO in the U.S.

The two sons were at Balmoral Castle in Scotland during their final phone call with their mother, who was calling from Paris.

“If I’d known that that was the last time I was going to speak to my mother, the things I would have said to her,” Prince Harry added. “Looking back at it now — it’s incredibly hard. I have to deal with that for the rest of my life: not knowing that it was the last time I’d speak to my mum, how differently that conversation would have panned out if I’d had even the slightest inkling that her life was going to be taken that night.”

The Duke of Cambridge shared similar thoughts about the rushed phone call.

“Harry and I were in a desperate rush to say ‘goodbye, see you later, can I go off?'” Prince William said. “If I’d known what was going to happen I wouldn’t have been so blasé about it. That phone call sticks in my mind quite heavily.”

Prince William and Prince Harry were ages 15 and 12, respectively, when their mother died. Princess Diana was killed in a car crash on Aug. 31, 1997 at age 36.

The new 90-minute documentary, “Diana, Our Mother: Her Life and Legacy,” will celebrate her life and work, Kensington Palace said.

Earlier this year, the brothers shared that they became “uniquely” close because of the loss of their mother.

“We are uniquely bonded because of what we’ve been through,” Prince William said. “But Harry and I over the years have not talked enough about our mother.” 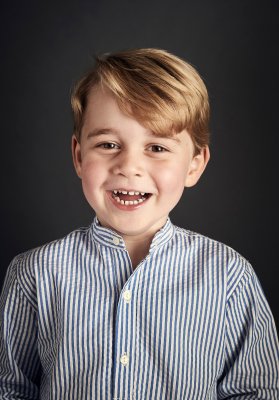 Prince George Is All Smiles in a New Official Portrait for His Birthday
Next Up: Editor's Pick