Game of Thrones star Sophie Turner arrived in San Diego for Comic-Con International with several of her castmates for the show’s big Hall H panel on Friday. But beforehand, the Sansa Stark actress stopped by EW’s suite to talk season 7 and her character’s increasing sibling rivalry with Jon Snow (Kit Harington) as the duo try to figure out how best to manage the North now that they’re back at Winterfell.

“I think the sibling rivalry stems from childhood,” Turner says. “The reality is Jon is the military man, and the sexism exists where he believes that [a man should be in charge]. And in reality, Sansa is a really wonderful politician, and he doesn’t recognize it enough to appreciate it. It’s difficult because military-wise, she doesn’t know anything. And she’s kind of butting in on that respect. And he, on the other end, is trying to be more of a politician, and he doesn’t know as much as she does. If they could just learn to collaborate.”

Expect a lot more Game of Thrones coverage today as the cast takes the big stage in San Diego. EW will have a live blog of the panel, follow @jameshibberd for updates.

Game of Thrones premiere coverage: Check out our deep-dive recap, as well as Maisie Williams discussing that cold open shock, our chat with Pilou Asbæk (Euron Greyjoy) about the flirty return of his mad pirate king, and myself and Darren Franich have our Game of ThronesWeekly podcast (with our “Dragonstone” episode now live, above). To stay up to date on everything Game of Thrones, follow our all-encompassing Facebook page and sign up for our exclusive newsletter. 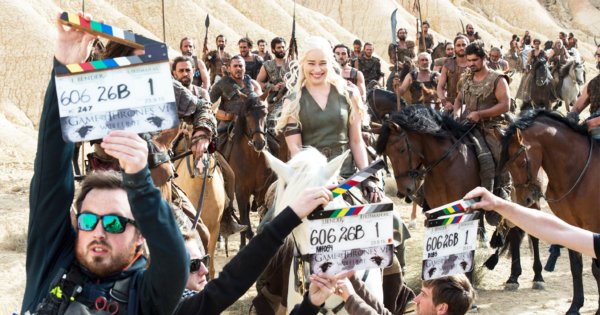 Meet the On-Set Photographers of Game of Thrones
Next Up: Editor's Pick