That Time the CIA Tried to Train Cats to Be Spies

Wednesday’s 70th anniversary of President Harry S. Truman signing the National Security Act of 1947 — which created the CIA and much of today’s national security-related bureaucracy — arrives at a time of heightened tension in the national security world, and will surely be an occasion to reflect on some of the Central Intelligence Agency’s most notable moments. But its history has also included moments that are a little less than illustrious — such as that time the agency investigated whether it would work to use cats to eavesdrop on private meetings.

In the mid-1960s, the CIA did try to see if that would work, in a short-lived experiment nicknamed “Acoustic Kitty.”

The idea to bug cats is believed to have come from an attempt to listen in on an unidentified head of state who happened to be located in an area with a lot of feral cats. CIA operatives noticed that the felines tended to wander in and out of the premises without catching the attention of any guards.

“Whether the concept of an ‘acoustic kitty’ came from a case officer or a tech is lost to memory, but the idea launched a research project that generated unwarranted ridicule and accusations after public disclosure,” according to Spycraft: The Secret History of the CIA’s Spytechs from Communism to Al-Qaeda. The Office of Research and Development figured out a way to implant a three-quarter-inch transmitter in the loose, fleshy part at the back of a cat’s neck, and a microphone in the cat’s ear canal. A very thin, almost invisible wire connected the two devices. The size of the transmitter meant the device could only hold very small batteries and only had space to record a limited amount of audio. (One attempted solution was to give a cat a transmitter in its rib cage and an antenna in its tail, the ex-CIA agent Victor Marchetti claimed in The Wizards of Langley: Inside the CIA’s Directorate of Science and Technology.)

But a cat, though able to get into the desired location easily, didn’t exactly make the best spy.

“They found [the cat] would walk off the job when he got hungry,” according to Marchetti’s account. In addition, such a cat couldn’t just be let loose to wander untrained — their ability to focus on one sound over another was a big part of the reason they were desirable spies, but they had to be taught what to listen to. But that training time went to waste during an exercise to see whether the cat would listen to people in a park without getting distracted. “They put him out of the van, and a taxi comes over and runs him over,” Marchetti wrote. “There they were, sitting in the van with all those dials, and the cat was dead!”

Word of the program got out to the public in 2001, when the National Security Archive declassified memos on the agency’s Science and Technology that were still heavily censored, but which included one dated 1967 entitled “Views of Trained Cats”: “The environmental and security factors in using this technique in a real foreign situation force us to conclude that, for our . . . purposes, it would not be practical,” it concluded, adding, “we satisfied ourselves” knowing that the technology “is indeed possible.”

And apparently the U.S. intelligence community is still open to animal spies. DARPA, the Defense department branch devoted to emerging tech, is apparently keen on perfecting insect espionage through the development of robo-bugs. 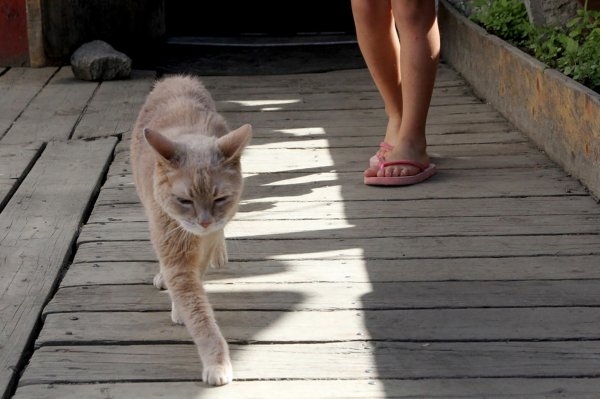 Stubbs, the Honorary Cat Mayor of a Small Alaskan Town, Has Died
Next Up: Editor's Pick