Tessa Thompson never expected to be at San Diego Comic-Con. The actor, who is known for her roles as a college radio DJ challenging her classmates on issues of race in Dear White People and a singer who falls for Michael B. Jordan’s boxer in Creed, watched superhero movies growing up but could never relate to them. “Catwoman was really important to me because she was a woman who looks like me who can occupy that space,” she says. “But besides her, I didn’t really see myself in these films.”

Except now she’s playing a strong woman in two genre projects: an executive cleaning up the mess at an android-filled theme park in HBO’s Westworld and an intergalactic warrior in Thor: Ragnarok. Thompson spoke to TIME at Comic-Con about why it’s important to have a diverse array of actors in these roles, how she tried to get in shape like Terminator 2′s Sarah Connor for Thor and why she’s questioning whether her character is human or host in Westworld.

How do you feel about the state of female action heroes right now?

With Atomic Blonde and Wonder Woman and Captain Marvel being introduced and all the wonderful ladies in the Marvel Universe right now, it seems like we’re having a moment.

But while it’s very exciting to play a character that can wield a sword, I think what’s important is more female characters that are complex and dynamic and layered. That’s happening more in cinema and definitely more on television, which is why it’s an honor to work with women like Evan [Rachel Wood] and Thandie [Newton] on Westworld.

You play a warrior in Thor: Ragnarok. I read that you tried to become as strong as Sarah Connor in Terminator 2 for the role. What inspired that?

Taika Waiti, the director, inspired that. I got cast, and I asked if there was a reference for her. At the time I was working in London on this movie Annihilation, and I was working with a swordsman who also trained Gal [Gadot] for Wonder Woman. But I also had to figure out for Thor what I wanted to look like physically, and Taika sends me this picture of Sarah Connor. I was like, “Yeah right, man.” She looks unreal.

But I wanted to gain weight, gain muscle. Valkyrie is strong like Thor. Chris is in really good shape and also just a huge human, so I didn’t want to look too small next to him because the character I’m playing holds her own with him. I also wanted to feel strong so I could feel confident enough to embody her. So, yes, now I can do pull ups. As long as I can do as many pull ups as Sarah Connor did onscreen, I’m good.

Why is that important for you to be a part of a movie like that?

When I first got the call to sit down with Taika about playing Valkyrie I was so excited because I’m such a fan of his films. They’re so singular. But I was really shocked because I didn’t grow up watching genre films or superhero films seeing people who looked like me in those movies.

Catwoman was really important to me because she was a woman who looks like me who can occupy that space. But besides her, I didn’t really see myself in these films. And I think you do have to see it to believe it.

Fans of Westworld are now questioning whether every character is a human or a host. Does creating that sense of mystery affect your acting choices on the show?

I think [creators] Jonathan [Nolan] and Lisa [Joy] are so smart in their treatment of us on Westworld. For example, Jeffrey Wright didn’t know he was AI until he got that script, and none of us knew either. I think that changed everything when we read that episode. It forced us to question our reality. All the actors playing humans were suddenly like, “Wait am I a human though?”

It was brilliant because if Jeffrey had known he was playing AI, he might have wanted to add to an affectation to it. Instead, he believed, just like the character Bernard, that he was human, and he went through the same experience the character went through.

So are you AI?

It had occurred to me before then that I could potentially be AI. Since that episode, I’m now convinced that I am. Part of me is praying that I’m not because I don’t want to spend all year nude.

But the actors are guessing as much as the audience. We get redacted scripts. Only Anthony Hopkins and Evan Rachel Wood knew what was going to happen in the final episode of last season. So you captured actors being shocked by what they were seeing as the characters were. We are starting the second season now and I’ve read only one episode.

Has the show changed your relationship to technology?

I think it’s made me conscientious. And I’ve been thinking a lot about the central question of the show: What do we as humans do when we think there’s no emotional cost? How do we treat the hosts? It makes me think about our treatment of the earth. We’re actively causing climate change when we don’t consider the cost. 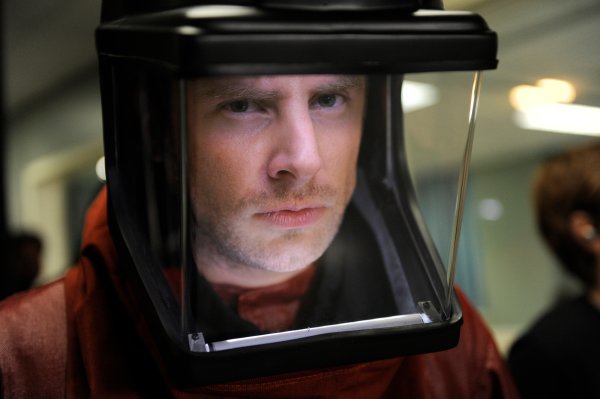