A helicopter which had been carrying Shane McMahon, son of World Wrestling Entertainment (WWE) founder Vince McMahon, is seen in a still from NYPD video after it landed on water off Long Island, New York on July 19, 2017.
Reuters
By Aric Jenkins

World Wrestling Entertainment personality Shane McMahon and his helicopter pilot emerged unscathed Wednesday morning after their chopper was forced to make an emergency landing in the Atlantic Ocean.

McMahon, 47, said that he heard a loud bang shortly before pilot Mario Regetien successfully landed the copter in waters off the coast of Long Island around 10:30 a.m., according to the New York Daily News.

“It’s very unsettling,” the on-screen promoter and son of wrestling legend Vince McMahon told the paper following his rescue by the Suffolk County Police Marine Bureau. “It’s very unnerving. But Mario was super calm, which made me super calm, and we landed perfectly.”

Photos captured the scene, showcasing the helicopter floating on yellow pontoons within the ocean. The cause of the incident remains unknown, but officials said the helicopter managed a “controlled water landing,” the Daily News reported.

Shane McMahon is a presenter on the popular cable series WWE Smackdown and controls a minority ownership stake of the professional wrestling company. 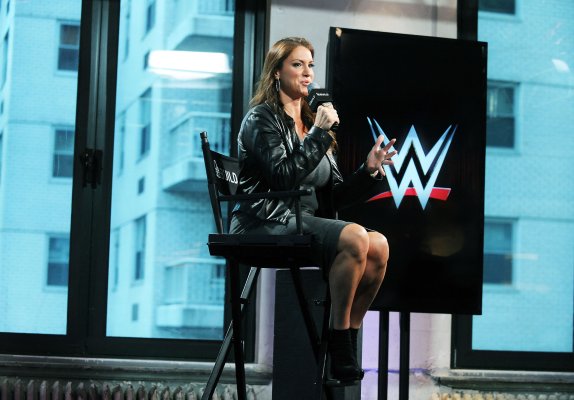 How Social Media Got WWE Wrestling to Ditch the Term 'Diva'
Next Up: Editor's Pick