What to Know About O.J. Simpson’s Parole Hearing As He Could Be Freed

O.J. Simpson will learn Thursday at a highly anticipated parole board hearing in Nevada whether he’ll soon be able to leave prison.

The 70-year-old former football star is seeking his freedom after serving more than eight years behind bars for an armed robbery in a Las Vegas casino hotel room in 2007. However, the case he is better known for is the double murders of his ex-wife and her friend. He was acquitted of that crime during a 1995 trial.

Here’s what to know about Simpson’s upcoming parole hearing and his past:

Why is he in prison?

Simpson was found guilty in 2008 of armed robbery, kidnapping, and other charges following a violent encounter with a pair of memorabilia dealers. Simpson and four other men went into a hotel room to confront the dealers and take back sports collectibles and other personal items Simpson said belonged to him, according to the Associated Press.

Simpson has no other prior felonies, record show. Years earlier, he was charged with killing his ex-wife, Nicole Brown Simpson, and her friend Ronald Goldman. He was ultimately acquitted. Simpson’s saga has captivated international audiences for more than two decades. His high-profile murder case in Los Angeles was dubbed the “trial of the century.”

What will happen at O.J. Simpson’s parole hearing?

Simpson could be sprung early from Nevada’s Lovelock Correctional Center, a medium-security facility where he is currently serving a 33-year sentence. He is approaching the nine-year minimum of his sentence.

The Nevada Board of Parole Commissioners said Simpson will appear before four board members Thursday through a video teleconference at 10 a.m. local time. The panel will consider his age, whether his conviction was a violent crime, his prior criminal record and his plans after release. Simpson will also be asked questions and will be given an opportunity to speak further. A final decision will be made that day, the board said.

The parole board members are the same four who granted Simpson parole in 2013 on the first portion of his sentence, a minimum five-year term for kidnapping and robbery charges. Simpson is now approaching eligibility for parole on the remaining four-year-minimum term.

What could happen to him next?

Simpson has a good chance of being released, according to the AP, which reported that no one is expected to oppose his parole Thursday. “Assuming that he’s behaved himself in prison, I don’t think it will be out of line for him to get parole,” said Simpson’s former prosecutor, David Roger.

The release could happen as soon as October, according to the Washington Post.

Simpson needs all four board members to rule in his favor. If the panel is not unanimous, two other parole board commissioners will be patched into the meeting that day to vote until at least four members reach the same decision. 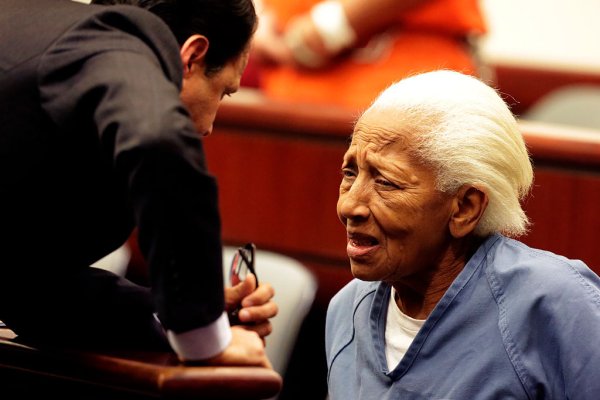 86-Year-Old Jewel Thief Doris Payne Has Been Arrested Again
Next Up: Editor's Pick