The father and fiancé of a woman fatally shot by a Minneapolis police officer over the weekend mourned her publicly in a pair of emotional news conferences after her death was ruled a homicide.

The police officer, who was identified by the Minneapolis Star Tribune as Mohamed Noor, fired his weapon while responding to a 911 call about a possible assault in an alley behind Damond’s home, authorities said. It’s unclear what prompted the officer to open fire.

Damond’s loved ones at home and back in Australia demanded justice as they remembered her as kind and funny. “Justine was a beacon to all of us. We only ask that the light of justice shine down on the circumstances of her death,” Damond’s father, John Ruszczyk, told reporters in Sydney, according to Reuters. He added her death was “our worst nightmare.”

Damond’s fiancé, Don Damond, said she had called 911 to notify police of a possible assault. “We lost the dearest of people and we are desperate for information,” he said at a news conference held outside their home. “Piecing together Justine’s last moments before the homicide would be a small comfort as we grieve this tragedy.”

The couple would have gotten married in August, the Tribune reported.

Authorities have not officially released the name of the officer who fired the shot. The two police officers involved did not have their body cameras turned on, the Minnesota Department of Public Safety Bureau of Criminal Apprehension said. They have both been placed on standard administrative leave while the shooting is under investigation.

Noor’s attorney, Tom Plunkett, said the officer offered his condolences to the family “and keeps them in his daily thoughts and prayers,” according to the Associated Press. “Officer Noor is a caring person with a family he loves, and he empathizes with the loss others are experiencing,” Plunkett said in a statement. 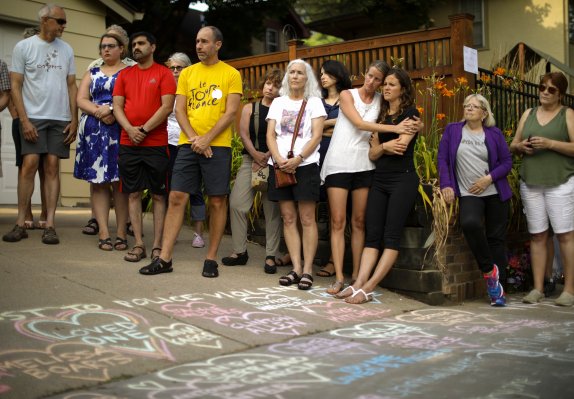 Minneapolis Cop Shot and Killed a Bride-to-Be
Next Up: Editor's Pick