Although Cersei Lannister rejected Euron Greyjoy’s marriage proposal in the season seven premiere of Game of Thrones, the King of the Iron Islands promised to return to the capital with a “priceless gift” that would change her mind.

At this point it’s unclear what could possibly convince Cersei to enter into another political marriage — especially if Euron’s fleet of 1,000 ships wasn’t enough to sway her. However, that hasn’t stopped fans from theorizing about how he intends to gain her trust.

Some think the gift will be none other than Cersei and Jaime’s estranged brother Tyrion, who became Daenerys’ Hand of the Queen after fleeing King’s Landing in season four. Euron referenced Tyrion twice during his pitch, alluding first to Twyin’s death at Tyrion’s hands and then defending his murder of Balon by suggesting that Cersei see how “wonderful” it feels to kill her own brother.

Others think Euron will try to capture another member of Dany’s camp to hand over, with three strong candidates being Euron’s niece Yara, Cersei’s longtime nemesis Olenna Tyrell or Myrcella’s murderer Ellaria Sand.

But the gift could also be an actual object. In George R.R. Martin’s A Song of Ice and Fire book series, Euron claims to be in possession of the Dragonbinder — a sorcerous horn that is used to control dragons.

“That horn you heard I found amongst the smoking ruins that were Valyria, where no man has dared to walk but me,” Euron says in A Feast for Crows. “You heard its call, and felt its power. It is a dragon horn, bound with bands of red gold and Valyrian steel graven with enchantments. The dragonlords of old sounded such horns, before the Doom devoured them. With this horn, ironmen, I can bind dragons to my will.”

With Daenerys intent on taking the Iron Throne from Cersei, it seems like a gift that could nullify the threat of Dany’s three dragons would be the most useful of them all.

Whatever the case, the description for “The Queen’s Justice” — the third episode of the season — states that Cersei will return Euron’s present. Perhaps there is truly nothing he can offer that will persuade her to share her power. 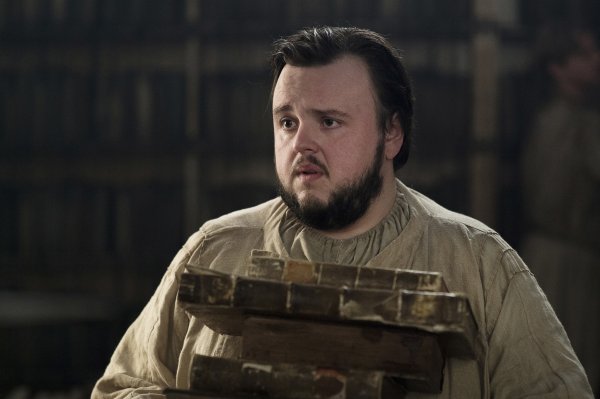 'Game of Thrones' Shows Why Medieval Libraries Chained Books
Next Up: Editor's Pick