Emoji may not have replaced text just yet, but they are getting closer: the pictorial icons have revolutionized digital communication since becoming a fixture of the iOS keyboard in 2011, and adopted by most other platforms soon after.

Monday July 17 marks the fourth annual celebration of the pictographic language with World Emoji Day. And with 2017 also heralding events like the introduction of expanded human emoji and the premiere of the Emoji Movie, it looks like emojis are truly coming of age.

Here are 7 things to know about Emojis on their special day:

1. For the third year running, the “Face with Tears of Joy” emoji reigns supreme on social media.

It dominates on Twitter and on Facebook as the most-used on both social media platforms. This should come as no surprise to those versed in emoji; after all, this same symbol was even the Oxford Dictionary’s Word of the Year in 2015.

The Unicode Consortium, the governing body that manages the official emoji keyboard, expanded its offerings dramatically in 2017, thanks to a new array of options in skin tone, gender selection, and professions. There were just 722 as recently as 2015.

They’re also wildly popular on Twitter, which regularly makes custom emoji for events and hashtags, and Instagram, where users can hashtag with emoji. Besides the “Face with Tears of Joy,” people tend to love the red heart, the heart eyes smiley, and the kissing face smiley across platforms.

5. Over the weekend, a group set a new record for dressing up in emoji costumes around the world.

Dedicated fans gathered in cities like Dubai, Dublin, and Moscow to set a new Guinness Record for donning emoji-face costumes simultaneously in advance of World Emoji Day and the release of The Emoji Movie on July 28.

6. Some of the most-requested emojis include an afro, a bagel and hands making a heart.

Emojipedia tracks requests by popularity for the year, with other symbols like a bald person, takeaway coffee and a chef making a kissing face also showing up as some of the most-wanted additions in 2017.

The “calendar” emoji — a minimized version of Apple’s iCal icon for both its desktop and mobile app — shows the default date of July 17. 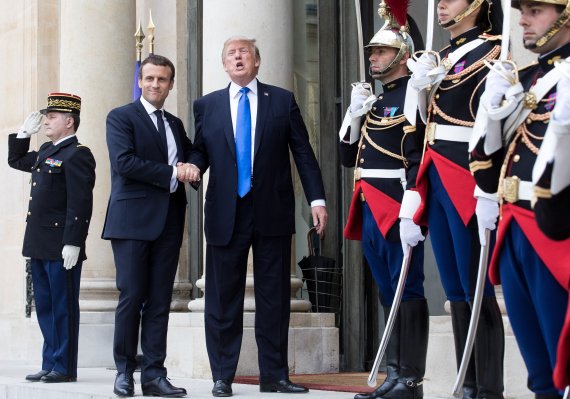 Trump Said He's 'Read So Much About D-Day' and Now the Internet Is Roasting Him
Next Up: Editor's Pick