Duterte Made Another Rape Joke. But Filipinos 'Really Get Him,' an Aide Says

A spokesman for Philippine President Rodrigo Duterte has justified a rape joke the president made on the grounds that the “majority of the people, especially the masses, really get him.”

Presidential Spokesperson Ernesto Abella came to Duterte’s defense at a press briefing Monday, Philippine news site Rappler reports, after the latter was criticized for remarks he made on Friday suggesting that some rapists were worthy of congratulations.

“What I don’t like are kids [being raped],” Duterte reportedly said during a speech in his Davao City hometown, Friday. “You can mess with, maybe, Miss Universe. Maybe I will even congratulate you for having the balls to rape somebody when you know you are going to die.”

The Philippines hosted the Miss Universe beauty pageant in January this year. Rumors Duterte would judge the pageant flared in the local press before its organizers said having government judges contravened official policy.

Addressing the latest controversy Monday, Abella apparently told reporters: “There are those who tend to zero in on certain details, but as far as the public is concerned, and they are the ones who really approve of him, they find the president is somebody who understands them, who has their common interests, their common good, at heart.”

Duterte’s Miss Universe comments are just the most recent of in a bizarre series of jokes about rape. In May, soon after ISIS-pledged militias overran the southern city of Marawi, the president urged soldiers to continue working, saying he would back them even if they each raped three women.

And on the campaign trail last year, Duterte talked about the rape-murder of an Australian missionary during a 1980s Davao City prison riot, stating that he, as mayor of Davao at the time, “should have been first.” 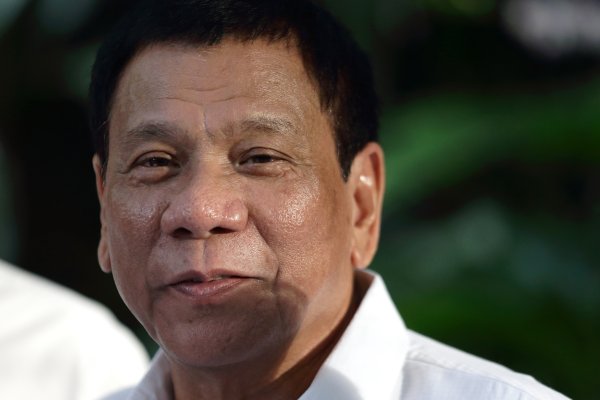 Philippine President Rodrigo Duterte: One Year On
Next Up: Editor's Pick