Six months into his term, President Donald Trump has the lowest approval ratings of any President in the last seven decades at this point in his tenure, a new poll finds.

Just 36% approve of Trump’s performance as President, according to an ABC News/Washington Post poll released on July 16. On April 20, as Trump was nearing his 100-day mark, his approval ratings were at 42%.

The last President to have comparable numbers during the first six months of their term with this poll was Gerald Ford, who replaced Richard Nixon following his resignation due to the Watergate scandal in 1974. In February 1975, Ford had a 39% approval ratings. Trump’s two immediate predecessors, Barack Obama and George W. Bush, both had approval ratings of 59% at this point in their presidencies.

The poll was conducted July 10 through July 13, as the news was breaking that Donald Trump Jr. had met with a Russian lawyer during the 2016 election because he was promised compromising information on Hillary Clinton. Trump’s son-in-law Jared Kushner and then-campaign manager Paul Manafort also attended the meeting. Details about the meeting had been disclosed before the poll was conducted, but subsequent reports revealed Trump Jr.’s motivation for the meeting. Most Americans — 63% — said it was inappropriate for Trump Jr., Kushner and Manafort to attend the meeting, according to the poll.

A majority of Americans, 60%, also think Russia tried to influence the election — up 4% from April. Of those who believe Russia’s attempt to intervene, most said Trump benefitted from that attempt. The poll’s margin of error is 3.5%.

President Trump tweeted about the poll shortly after it was released, claiming it was “just about the most inaccurate poll” during the election.

And an NBC News/Wall Street Journal poll conducted in counties across the country that Trump won paints a different picture. Of the 439 counties polled, 50% approve of Trump’s job performance so far. 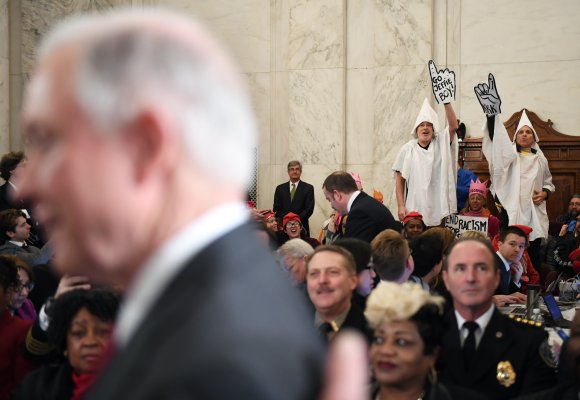 Judge Throws Out Conviction of Protester Who Laughed During Jeff Sessions Confirmation Hearing
Next Up: Editor's Pick