Singer Aaron Carter was arrested under suspicion of driving under the influences and for drug-related charges Saturday night in Georgia, the Habersham County sheriff’s office said.

Madison Parker, Carter’s girlfriend, was riding in the vehicle with him. She was charged with obstruction of police, possession of marijuana of under one ounce and possession of drug-related objects.

They were both booked Saturday evening and remained in custody Sunday morning. Both Carter and Parker posted bonds for more than $4,000, according to the sheriff’s office.

On Saturday night, Carter’s team tweeted that he wouldn’t be making it to his Kansas City performance. “He promises to come back soon,” the tweet read.

Carter, perhaps best known as a child star made famous by his 2000 hit “I Want Candy,” had plans to debut new music in Alabama on July 18, according to his posts on social media. 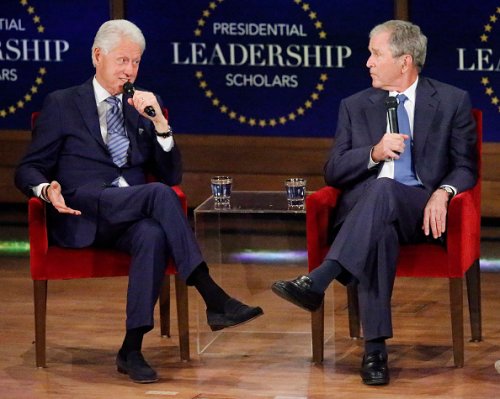 The Internet Is Losing It Over This Photo of Bill Clinton Posing Between Two George Bush Statues
Next Up: Editor's Pick