A Skydiver Told His Wife He Wasn't Going to Pull Parachute Cord. She Arrived 'Moments' Too Late

The wife of a veteran skydiver raced to the field where her husband was planning to jump after he sent her a video saying that he was not going to pull the ripcord on his parachute – but she arrived just moments too late.

Capotorto Vitantonio, 27, never deployed his parachute after jumping from 13,500 feet above DeLand, Florida, on Tuesday’s first flight of the day — according to a police report obtained by the Orlando Sentinel. He was found facedown in a field near Skydive DeLand, one of the busiest skydiving hubs in the country.

Before Vitantonio’s fatal jump, his wife Costanza Zitellini, 25, ran into the hanger and told employees not to let her husband go up in a plane, according to the report.

Zitellini said she received a video message from Vitantonio telling her that he was “not going to pull the cord and that he was going somewhere wonderful.”

A Skydive DeLand employee told police that the plane had already taken off, but she immediately radioed the plane and told the crew not to let Zitellini jump. It was too late.

Vitanonio, an Italian national, and his wife worked for United Parachute Technologies – a parachute maker in DeLand.

This is the fourth death in five years at Skydive DeLand, WKMG-TV reported. 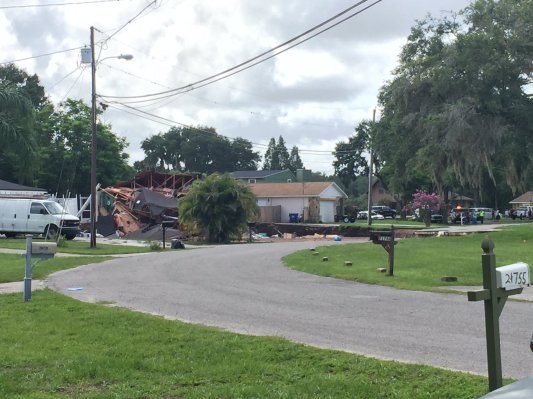 Florida Sinkhole Swallows 2 Houses and It's Still Growing
Next Up: Editor's Pick