Watch a Woman Accidentally Ruin $200,000 Worth of Art While Posing for a Great Selfie

Be careful where you selfie. That’s the lesson learned by a visitor to Los Angeles’s The 14th Factory, a temporary art exhibit and factory space currently hosting a show of stylized crown sculptures. But a few weeks ago, one snap-happy show attendee caused as much as $200,000 in damage when she toppled, domino style, a series of plinths, Gloria Yu one of the artists involved told Hyperallergic. Three of the sculptures are now permanently damaged, according to a spokeswoman.

While it’s unclear whether this “art” or life, you can see it all go down in a security video from the space, in which the woman appears at the far end of a row of plinths to take that photo — and seems to lose her footing. Down go all ten of the plinths, taking the art with them.

“In entering The 14th Factory, the visitor is transformed into a central player in a collaboratively fabricated adventure and motion picture that engages and unfolds,” it states on the website. Perhaps, in this case, the visitor was a little bit too much of a central player.

Then again, her choice to selfie may be understandable: she was most likely trying to frame herself against one of the modernist reimagined crowns for a better shot. Or maybe she read this review from the L.A. Times, which boldly predicted the inclination towards selfie-taking in the social-media-oriented show.

In any case, it looks like the show is still up and running through the end of July. Show tickets are around $18 generally, although they’ll need quite a few new visitors to recoup that $200,000 cost. 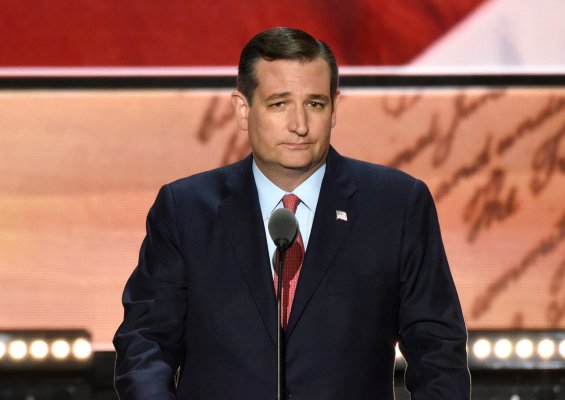 The Internet Just Found Another Perfect Doppelgänger for Ted Cruz
Next Up: Editor's Pick