The internet savvy megastar took to Instagram in the wee hours of Friday to share the first photo of her and her husband 4:44 rapper Jay Z’s 1-month-old twin babies with a floral maternal goddess Instagram photo. In the caption, she shared the names — girl Rumi and boy Sir Carter, the subject of much speculation.

The photo — showing Beyoncé carrying her little wee ones — rapidly reached 1 million likes, and garnered nearly 6 million likes from people sharing in The Carters’ joy as of Friday morning.

The aesthetics were similar to her birth announcement that caused massive internet pandemonium in February 2017. Standing at an altar-like sculpture, the Lemonade singer wore a ruffly Palomo Spain robe dress and an appropriately ice blue floor-sweeping veil to match the gravitas of the announcement fans were aching for.

“Sir Carter and Rumi 1 month today,” she captioned the photo, and she even used seven emojis to communicate how blessed and loving her family of five is now.

Unsurprisingly, people on the internet were blown away by the artistic announcement of the new royals. The news effectively disrupted sleep, made people feel grateful to be alive in the same era as this blessed family unit, and some users jokingly reported an inability to breathe.

See the best of the reactions of the momentous occasion below.

Stopping the world is no problem at any time.

One treasure placed the image in The Birth of Venus by Sandro Botticelli.

People could not handle the excellence.

One user noticed the news compromised her ability to breathe.

Some viewed the Sir Carter’s handle as an example of Beyonce’s smart planning for a new regime.

The timing of the moguls was noted.

Someone got right to work on how to monetize the occasion.

Many were just grateful.

A high-impact model shared her love of the wardrobe choice.

Someone joked about another V.I.B. 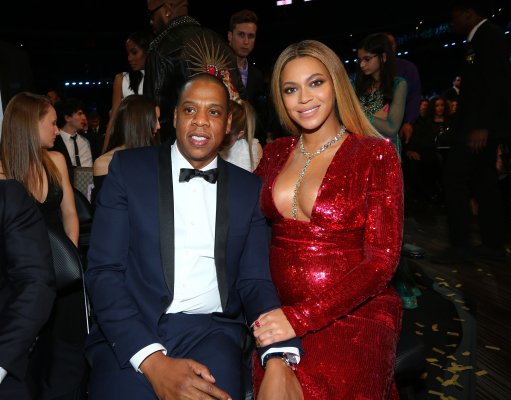 Beyoncé and Jay-Z Finally Reveal their Twins' Names
Next Up: Editor's Pick