Acid Attacks Have Become a Gruesome Criminal Trend in the U.K.

It was late at night in 2015, and Samir Hussain was walking out of a movie near his West Sussex hometown. The late-night screening of Straight Outta Compton had been ok, but disturbed by two aggressive men throwing candy at him and his friend Yasir. Then, in the parking lot, the two men approached them again. Catcalls escalated into a fistfight, and suddenly one of them doused the 29-year-old in a liquid that he says felt “too heavy to be water.”

Then it began to burn. The liquid was sulphuric acid, which sears and blisters the skin on contact. “I could just about open one of my eyes, I could see him smiling at me,” Hussain tells TIME of his attacker. “It was sinister.” Although the man, Michael McPherson, was later tried and jailed for eight years, the corrosive liquid did its dreadful work. Now, Hussain wears a mask to help heal the scars that cover three-quarters of his face. He will bear these marks for the rest of his life.

The retail phone-shop worker’s horrific ordeal is just one incident in what has become a disturbing trend in the U.K., especially in the capital city of London. According to the Metropolitan Police, assaults using corrosive materials rose by nearly 80% (458) in 2016, having risen steadily over the past three years. This year alone, 199 attacks have been recorded so far. On April 9, acid was flung on a Chinese family as they took a stroll in North London, leaving the father with what police described as “life-changing injuries.” Later in the month, the then-boyfriend of British television presenter Ferne McCann was arrested in connection with an incident where acid was thrown over partygoers at a nightclub. In May, a gang squirted a noxious chemical on people seated in a van during a robbery in south-east London. Then, on Thursday night, five people were attacked with acid within the space of 90 minutes in separate attacks across north-east London. The suspects arrested on Friday were aged 15 and 16.

The trend is being driven not by a common motive, but by the ease with which corrosive materials can be acquired by those seeking to do harm. Corrosive alkalis typically found in drain cleaners, bleaches and sulfuric acid in battery fluid can be bought for as little $1 in discount stores and supermarkets across the country. “What we are seeing is the ease in obtaining these types of substances, the majority of which can be found under kitchen sinks,” Detective Chief Inspector Mike West, the Metropolitan Police’s lead for corrosive-based crime tells TIME. “With anything, people see other people doing it so they will naturally pick it up,” he says.

The lack of a pattern in the types of victims makes it difficult to police a response to the increase in crimes. Unlike in South Asia, where women are disproportionately targeted by acid attackers, “here, two-thirds of victims are men,” Jaf Shah, executive director of Acid Survivors Trust International (ASTI), tells TIME. Early data suggests that the majority of both attackers and victims are white British men, he says, but the motives span from revenge attacks to hate crimes, domestic abuse, gang crime and organized crime. This “complex picture” is muddied by the lack of a standardized approach to recording these crimes, he says. “You need to have the data otherwise there is a blanket response that doesn’t tackle or reach those communities,” he says.

The law is also yet to catch up to the new trend. Carrying a bottle of acid is not illegal in Britain, but carrying a firearm or concealed knife is. “The police force have their arms tied behind their backs,” Labour Party lawmaker Stephen Timms, who is the member of parliament for East Ham, tells TIME. “While the laws are not in place, that means they can’t arrest anyone walking around with sulphuric acid.”

The use of corrosive materials is not a new phenomenon in Britain. Sulphuric acid, which used to be referred to as vitriol, was first manufactured on an industrial scale in the country during the 18th century. A Glasgow newspaper, Reformers’ Gazette, recorded in 1832 that a man was hung for throwing vitriol on a fellow servant while he slept and soon a term was was coined for acid attacks, vitriolage. Later in the 20th century, popular culture began making references to it. Notably in Graham Greene’s 1938 book Brighton Rock the young anti-hero carries a vial of vitriol that becomes the eventual cause of his demise.

Now, young Britons are arming themselves with acid once again. Teenagers from deprived areas are bringing bottles of acid to school as a form of self-defense, according to the London Times. The bottles can evade metal detectors installed in certain schools to tackle knife crime. West, from the Metropolitan Police, suggests that those under the age of 18 should be banned from buying corrosive materials, similar to restrictions on buying knives.

Timms, constituency is in the London borough which has seen the highest rate of attacks in the city, wants that to go further. “I think there is a strong case being made by the British Retail Consortium (BRC) for buyers of sulphur-based acids to hold a license,” he says. The Home Office is now considering new restrictions on a range of products, but the National Police Chiefs’ Council on July 6 warned that it would be “virtually impossible” to put restrictions on the sale of all corrosive substances from drain cleaner to anti-freeze.

The public is now beginning to awaken to the trend. A national petition calling for tougher licensing laws has so far received nearly 400,000 signatures. It was created in response to a high-profile attack in June, when an aspiring model Resham Khan and her cousin suffered horrific face and neck injuries when sulphuric acid was poured on them as they waited in traffic in east London. It was an apparent hate crime, and unprovoked. Timms, who is the minister of the constituency where the attack happened in East London, has arranged for a debate in the U.K. Parliament about the issue.

Thursday’s attacks have only intensified calls for some form of response from the government. “The difficulty is if someone has a a knife it is pretty obvious, you look at it and it’s a knife,” Home Office Minister Sarah Newton told the BBC on Friday of the difficulty authorities’ have in preventing attacks. “Some of these acids are concealed, like in a bottle of Lucozade, so it is much more difficult issue to tackle” she says. “But we will do everything we can to make sure an appropriate workable regime to reduce these appalling crimes” she says.

All of this comes too late for Hussain, who says he suffers from post-traumatic stress, and has lost his ability to trust new people. He just hopes this new burst of political consensus will prevent others from what happened to him. “Nobody should go through something like this” he says. 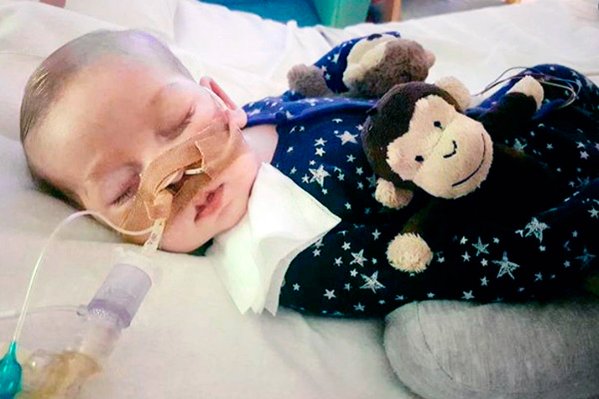 How U.S. Conservatives Have Changed the Fight for Charlie Gard's Future
Next Up: Editor's Pick