U.S President Donald Trump arrives at the start of the the G20 summit on July 7, 2017 in Hamburg, Germany.
Sean Gallup—Getty Images
Ideas
By Maya MacGuineas
MacGuineas is president of the bipartisan Committee for a Responsible Federal Budget, and a Director of FixUsNow.org .

President Donald Trump just got the same warning presidents before him have received every year for decades: Social Security faces major financing challenges that should not be ignored.

The notice came in the form of an annual report from the program’s trustees, which said the program’s insolvency will hit in 2034 — just 17 years from now. The news usually receives a day or two of attention, and then it returns to the back burner for another year. For Trump, however, the years are starting to run short, and he might not be able to punt like his predecessors did.

Once a problem that seemed far off for future generations to resolve has now become a problem for those already collecting Social Security benefits, many of whom will live to see the day of insolvency. For example, the program’s combined trust funds will be exhausted when today’s 50-year-olds reach the normal retirement age and today’s youngest retirees turn 79. Social Security is a $12.5 trillion problem hiding in plain sight, and while fixing it is still a manageable task, failing to do so in time could be a major cloud hanging over the president’s legacy.

As the Trustees document, the program is already paying out more in benefits each year than it collects in the payroll taxes that fund it — and it has been for seven years now. The difference is made-up from interest payments that are owed to the trust funds, but that amounts to one part of the government paying another, so it is already adding pressure onto the rest of the budget. Those interest payments amount to roughly $700 per household per year.

The built up reserves of the trust funds are projected to run out by 2034, at which time payments to recipients will be limited to whatever is collected in taxes. That amounts to a 23% cut for every recipient no matter age or need.

So clearly, Social Security cannot be left unchanged. So what can be done?

A reasonable plan could include a mix of policies, perhaps including raising the retirement age and indexing it to life expectancy, raising the current $127,200 cap on earnings subject to the payroll tax, and reducing the growth of benefits for higher earners. My goal would be to both ensure that those who depend on the program are protected, while also balancing the growing cost of Social Security with other pressing priorities — from programs for children, the vulnerable, public investments, and shoring up our education and worker retraining systems.

While we all may differ on specific priorities and policies, we should be able to agree that failing to make changes is irresponsible and adds to the costs. For example, closing Social Security’s shortfall today would require either immediately increasing payroll taxes on all workers by 22%, reducing benefits for all current and future beneficiaries by about 17%, reducing benefits for only new beneficiaries by 20% or some combination. If lawmakers wait until 2034, they will have to raise payroll taxes by nearly 32%, and even eliminating benefits for new beneficiaries would not be enough to keep the program solvent. It is a sentiment shared by Social Security’s own trustees, who warned lawmakers to “address the projected trust fund shortfalls in a timely way in order to phase in necessary changes gradually and give workers and beneficiaries time to adjust to them.”

Unfortunately, it is a sentiment not shared by the President, who vowed not to touch the Social Security retirement program. When asked about it, Trump has said he would save the program by eliminating waste, fraud and abuse, and by growing the economy so much that it would result in an influx of revenue.

But neither of these would solve the problem. Even eliminating all fraud would not significantly improve the solvency of the program, as there is not enough abuse in the system to significantly impact its costs. Totally eliminating all improper Social Security payments would buy the trust fund only about four months of solvency—less than a rounding error. Meanwhile, higher economic growth would simply mean delaying the program’s shortfalls rather than solving them, since higher growth translates into higher benefits.

The President’s logic is backwards. He is not saving Social Security by leaving it alone — he is ensuring its demise. Saving one of the most popular programs in U.S. history is a much better legacy than standing by as it fails to live up to its promises and jeopardizes the retirement security of those who depend on it most.

How old will you be when Social Security’s funds run out? We created this easy tool to tell you and show how much money you stand to lose. And we created an even more important one that lets you decide how you would fix it. Maybe our political leaders should give it a try. 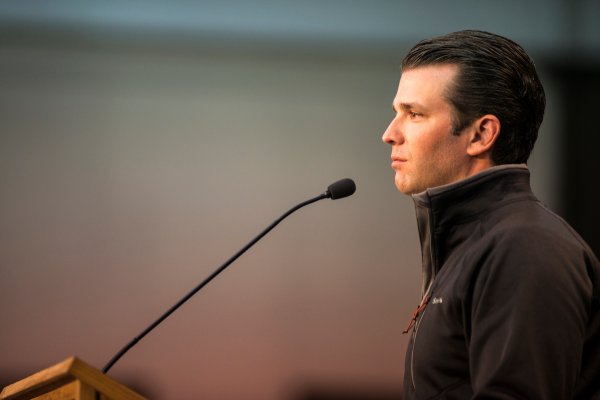 Donald Trump Jr. and the History of Opposition Research From Foreign Sources
Next Up: Editor's Pick