If President Donald Trump was looking for a relatively stress-free getaway from the fraught White House, he might just have found the most unlikely place for it — Paris — where he landed on Thursday morning for a 28-hour visit.

The new President Emmanuel Macron — little more than half Trump’s age — has lobbed withering blasts at Trump for months, over his decisions to pull the U.S. out of Paris climate accord, question NATO’s usefulness, and support Britain’s exit from the E.U.

Macron, just 39, received a gushing election endorsement in May from former President Barack Obama. Trump, 70, bluntly tweeted his admiration for Macron’s far-right election rival, Marine Le Pen, and he told a conservative convention that because of the terrorist attacks, “Paris is no longer Paris.” When the two presidents finally met in late May, Macron shook Trump’s hand in a white-knuckle grip that he admitted was a planned show of power.

But at least on Thursday and Friday, the two men — polar opposites in taste and temperament, who probably hoped never to have to deal with one another — will meet as fellow commanders-in-chief, representing two powerful military forces. If nothing else, that is something on which the two leaders are in sync. “France is appearing as a strong country, a country that can be used by the West against terrorism,” says Dominique Moisi, senior advisor to the French Institute of International Relations in Paris.”This is a well-timed trick for Macron. The calendar was in his favor.”

Macron — deeply read in history — has shaped Trump’s visit around military pomp and ceremony, culminating in the celebration on Friday of Bastille Day, the most important date on the French calendar, which marks the French Revolution. This year, the day also marks the 100th anniversary of American troops joining the Allied forces in World War I — a not-too subtle message to Trump about the importance of multilateral action.

As guest of honor to Friday’s Bastille Day parade, Trump is scheduled to stand alongside President Emmanuel Macron on the viewing stand, and watch French troops march up the mile-long Champs-Elysées Avenue, along with 188 U.S. service members from the Air Force, Army and Navy. In the sky, the traditional military flypast — complete with the blue, white and red tricolor — will include for the first time U.S. F-16 Thunderbirds and F-22 Raptors.

If all that was not symbolic enough, Macron will greet Trump not at the presidential Elysée Palace, but in the courtyard of Les Invalides, the national war museum and burial place of Napoleon Bonaparte, where the two men will pay homage to the 19th century emperor. And on Thursday evening, Macron and his wife will host the Trumps at dinner in the Michelin-starred Jules Verne restaurant atop the Eiffel Tower, with jaw-dropping views of the Seine River and Paris monuments.

In all, Macron’s invitation to Trump is seen in Paris as a masterful ploy. Despite Trump’s deep unpopularity in Europe, including France, a BFM Television poll on Wednesday found that nearly 60% of French support Macron’s decision to invite Trump.

By hosting Trump now, Macron ensured that the U.S. president visited him before Macron visited Washington; that gives Macron an edge in the two leaders’ ongoing power play. In addition, Trump is also visiting Paris before the other big European centers of power — London and Berlin — underscoring Macron’s attempt to cast himself as the new leader of Europe. “Remember, Britain’s Prime Minister Theresa May went to Washington saying she was recreating the special relationship,” Moisi said. “But Trump is coming to Paris, not London. From a diplomatic view, it is good performance.”

Besides, he says, the French believe that while U.S. presidents come and go, their country’s survival in two world wars has depended heavily on the U.S. — a historical fact drummed into French citizens from an early age. The thinking, according to Moisi, is “The present should not hijack the past.”

Once again, France faces urgent threats — this time from terrorist attacks. Friday is the one-year anniversary of the attack in Nice, in which a man declaring allegiance to ISIS rammed his truck into Bastille Day crowds, killing 86 people; after Trump leaves Paris on Friday, Macron will fly to Nice to mark the anniversary.

The French military in Friday’s parade is deeply involved in fighting Al-Qaeda in Mali and elsewhere in West Africa, and the French fighter jets in the flypast have been key to the U.S.-led air strikes on ISIS positions in Syria. “Macron will be happy to impress Trump and show him that we have a real army,” says Pierre Haski, columnist for the weekly L’Obs magazine. “They are both interventionist countries.”

But what might be most surprising to Trump is not the firepower he sees. It could rather be what he will not see: protests.

Only two demonstrations are planned — one in eastern Paris on Thursday, the other in northern Paris on Friday — both several miles from where Macron and Trump will be. They are geared primarily at protesting Macron’s proposed laws at loosening labor protections, with Trump’s visit only a marginal issue at the events.

For that, Trump has another difference between France and the U.S. to thank: the long summer break. Countless thousands of Parisians have already left for the long French vacations, and the city already has a languid, empty feel. “There are just no big demos in July,” Haski says. Proof again for Macron that his invitation was well timed. 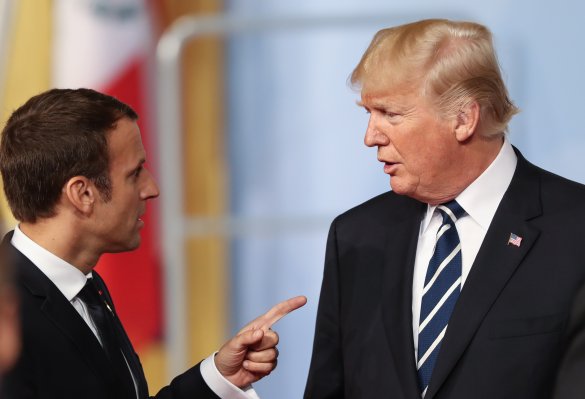 Trump Travels to Paris for Bastille Day Celebrations
Next Up: Editor's Pick