Education Dept. Civil Rights Head: 90% of Campus Sexual Assaults Amount to 'We Were Both Drunk'

A Department of Education official apologized after saying that “90%” of sexual assault accusations on college campuses “fall into the category of ‘we were both drunk,'” during an interview as Education Secretary Betsy DeVos prepares to meet Thursday with a range of advocacy groups to discuss the issue.

Candice Jackson, who leads the Education Department’s Office for Civil Rights, told the New York Times that for most sexual assault investigations, there’s “not even an accusation that these accused students overrode the will of a young woman.”

“Rather, the accusations — 90% of them — fall into the category of ‘we were both drunk,’ ‘we broke up, and six months later I found myself under a Title IX investigation because she just decided that our last sleeping together was not quite right,'” she said.

“As a survivor of rape myself, I would never seek to diminish anyone’s experience. My words in the New York Times poorly characterized the conversations I’ve had with countless groups of advocates,” she said in a statement Wednesday evening. “What I said was flippant, and I am sorry. All sexual harassment and sexual assault must be taken seriously—which has always been my position and will always be the position of this Department.”

But her original comment alarmed some advocates for sexual assault victims, including Jess Davidson, the managing director of the group End Rape on Campus.

“That statement put a pit in my stomach when I read it,” she told TIME, because it came from the “person who is nationally in charge of investigating all of these cases.” Davidson said she’s also concerned by Jackson labeling the women who have accused President Donald Trump of sexual harassment and assault as “fake victims.”

“The statement made it sound like she believes that 90% of accusations are false reports,” Davidson said. “Statistically, that is untrue.” (A 2015 study published in the journal Violence Against Women found that the prevalence of false allegations of sexual assault falls between 2% and 10%.)

Jackson organized the meetings DeVos will take part in on Thursday with victims’ advocates, as well as groups advocating for the due process rights of accused students.

Among them will be Cynthia Garrett, co-president of Families Advocating for Campus Equality (FACE), a nonprofit founded by mothers of sons who were falsely accused of sexual misconduct in college. Garrett said she hopes to encourage DeVos to change a current policy that she views as “one-sided.” She referenced a 2011 Dear Colleague letter issued by the Department of Education’s Office for Civil Rights under former President Barack Obama, which called on universities to better investigate cases of campus sexual assault and issued guidance for how to interpret Title IX when it comes to handling sexual misconduct complaints.

“I think the package made colleges feel as though the only way to be safe was to err on the side of finding the accused responsible,” Garrett said.

But Davidson said the guidance was an important improvement, and she plans to encourage DeVos not to overturn it when she meets with her on Thursday.

The Education Department’s inclusion of FACE, Stop Abusive and Violent Environments and the National Coalition for Men has drawn heavy criticism from victims’ advocates who say they can be hostile to accusers. But Garrett defended the work of her group.

“We have always tried to be fair and balanced in our organization. We’ve been very careful,” Garrett said. “Most of us are mothers. We have daughters, so we’re not looking to make victims suffer or deny them protections. That’s so far out of the realm of possibility or desire. We just want the system to be fair for both.” 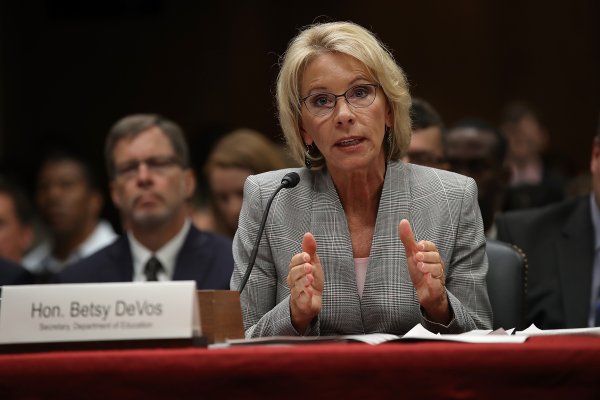