View of Donald Trump Jr, one of candidate Trump's sons, as he speaks from the podium during the Republican National Convention at Quicken Loans Arena, Cleveland, Ohio, July 19, 2016.
David Hume Kennerly—Getty Images
By Tessa Berenson

Critics of Donald Trump Jr.’s decision to meet with a Russian lawyer offering damaging evidence about Hillary Clinton have accused him of collusion. But it’s not at all clear whether President Trump’s eldest son actually broke any laws.

Collusion is a vague term and is not itself a federal crime. Whether Trump Jr. broke any laws depends on the nature of his cooperation with Russia, if any, and whether he impeded any investigations into the matter. No law enforcement officials have accused Trump Jr. of committing a crime, and he has publicly denied having done anything wrong.

Here are four legal areas that are under public debate regarding the President’s eldest son agreeing to accept opposition research from a foreign power.

“Having meetings and discussions with foreign representatives or foreign countries is not itself regulated,” says Jan Baran, a partner at Wiley Rein. “And in fact, the [Federal Election Commission] has for decades acknowledged that a foreign national who may not make a campaign expenditure under law may be a volunteer for a campaign.”

In the past, the FEC has approved foreign nationals to work as unpaid volunteers on campaigns and allowed a congressman’s wife who was a member of Guatemalan parliament to campaign with him, Baran says. “Everyone’s upset that Don Jr. met with Russians,” says Baran. “But I don’t see where there’s a violation of campaign finance laws, let alone a conspiracy to violate those laws.”

But other election law experts disagree. Robert Bauer, White House counsel to former President Barack Obama from 2009 to 2011, explained to New York why he thinks the information Russia offered Trump Jr. could be considered “of value” under the law. “The Russian lawyer, Natalia Veselnitskaya, said the campaign wanted that material, or wanted negative information on Hillary Clinton very badly,” said Bauer. “An important part of the Trump campaign’s strategy was to create major doubts about Hillary Clinton . . . and so any material that somebody could acquire that would dramatically support those claims was of exceptional value to the campaign.”

If Bauer is right, then some argue that he could be in legal jeopardy even if the meeting didn’t result in any valuable information changing hands, as Trump Jr. has claimed. “The fact that he . . . met with her is an overt act that may support criminal intent,” Notre Dame University law professor Jimmy Gurule told USA Today. “Ignorance of the law is no defense.”

Trump Jr. could find himself in trouble not just over the meeting itself, but for his shifting accounts of how it transpired. “Did I meet with people that were Russian? I’m sure, I’m sure I did,” Donald Trump Jr. told the Times in March. “But none that were set up. None that I can think of at the moment. And certainly none that I was representing the campaign in any way, shape or form.” Then he said the meeting was only about an old program involving American adoptions of Russian children. Then he admitted he invited both campaign manager Paul Manafort and top campaign aide Jared Kushner to sit in on the meeting knowing they would discuss information about Clinton.

Lying to the public or the media is generally not a crime, thanks to the broad free speech protections of the First Amendment. But if Trump Jr. provides shifting or untruthful explanations to the investigators probing links between the Trump campaign and Russia, he could be charged with providing false statements or obstructing justice, both of which are crimes.

Virginia Sen. Tim Kaine, Clinton’s former running mate, said Tuesday that Trump Jr.’s actions had risen to “potentially treason.” As the only crime defined in the Constitution, treason is a serious offense. But it’s also rarely prosecuted. There have been just 30 treason trials in the U.S. since 1789, according to the Constitution Center.

In Section III of Article III, the Constitution reads: “Treason against the United States, shall consist only in levying war against them, or in adhering to their enemies, giving them aid and comfort. No person shall be convicted of treason unless on the testimony of two witnesses to the same overt act, or on confession in open court.”

It is not clear whether Russia is an “enemy” of the U.S. as defined by the treason clause. The answer is probably not. The two countries have a generally adversarial relationship, but the U.S. is not in a declared war with Russia, which means that Trump Jr.’s actions would likely not be considered treasonous.

“For purposes of American treason law, the details of Donald Trump Jr.’s relationship with Russia are irrelevant,” writes Carlton F.W. Larson in the Washington Post. “He could be a paid foreign agent of Russia; he could take an oath of allegiance to Russia; he could even bug his father’s White House bedroom on behalf of Russian intelligence. None of those actions would amount to treason in the narrow sense that our Constitution defines it.”

But the Logan Act has never been successfully used, according to Steve Vladeck at Lawfare. The last indictment under the Act took place more than 200 years ago. There’s a legal doctrine called “desuetude” that says statutes may lapse if they’re never enforced, making it even more far-fetched that the Logan Act could be employed against Trump Jr.

— with reporting by Massimo Calabresi 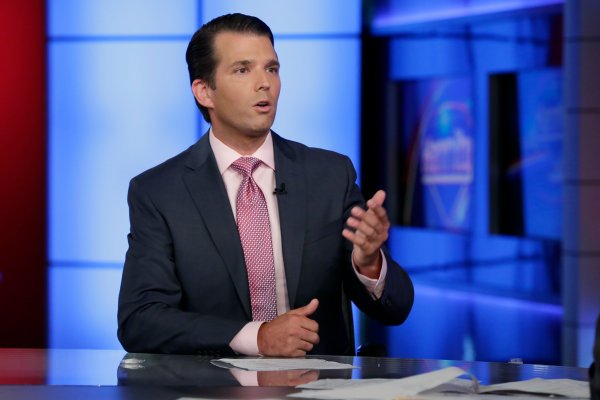 Donald Trump Jr. Speaks About Meeting With Russian Lawyer
Next Up: Editor's Pick