Over 100 survivors of sexual assault wrote an open letter calling on Secretary of Education Betsy DeVos to uphold guidance from the Obama administration on how federally-funded universities and colleges should respond to allegations of sexual violence.

The letter, which was published Wednesday by Teen Vogue and signed by 114 survivors from 25 states, says that the Department of Education has indicated that it is “seriously considering further dismantling protections” for survivors of campus sexual assault and violence. “We come forward with a simple request: Don’t,” the letter reads.

“Today, we 114 survivors of sexual assault, ask education secretary Betsy DeVos: ‘exactly who are you here to serve?'” the letter reads. “For us, this is personal, and traumatizing. From the moment we were raped or assaulted, the question of who protects us has haunted us all… We cannot imagine a more cruel or misguided policy agenda than one that withdraws protections from vulnerable students.”

How DeVos will address sexual assault on college campuses has been a point of contention since President Donald Trump nominated her to lead the Department of Education. During her confirmation hearing in January, DeVos said it would be “premature” for her to say if she would uphold the Obama Administration’s 2011 “Dear Colleague” letter, which advised college administrators to consider sexual assault as a form of sexual harassment prohibited under Title IX and provided direction on how campuses should better respond to allegations.

In June, the Department of Education put forth new guidance “regarding the scope of the investigation of all [Office of Civil Rights] cases,” including sexual assault inquiries. The new directives eased requirements that investigators review past information to identify potential systemic problems and that regional offices alert department officials in Washington to complaints about sensitive issues, including mishandling of sexual assault cases. A Department of Education spokesperson told the New York Times at the time that the new directives were aimed at ending a backlog of cases to assure “every individual complainant gets the care and attention they deserve.” But the guidelines also prompted concerns that the move will weaken protections for sexual assault survivors.

Candice Jackson, who heads the Department’s Office of Civil Rights (and is a sexual assault survivor), told the New York Times Wednesday that she thought current policies ignored the rights of accused students.

Survivors banded together to write the letter after the Department of Education reached out to survivors and advocates to request a meeting, according to the Huffington Post. DeVos will meet with sexual assault survivors and advocates from End Rape on Campus, National Women’s Law Center, National Center for Transgender Equality and other groups on Thursday. The same day, she will also sit down with groups representing students who say they were wrongly accused of sexual assault, including the National Coalition for Men and SAVE: Stop Abusive and Violent Environments, according to a press release.

The Department of Education did not immediately respond to Motto’s request for comment about the letter. 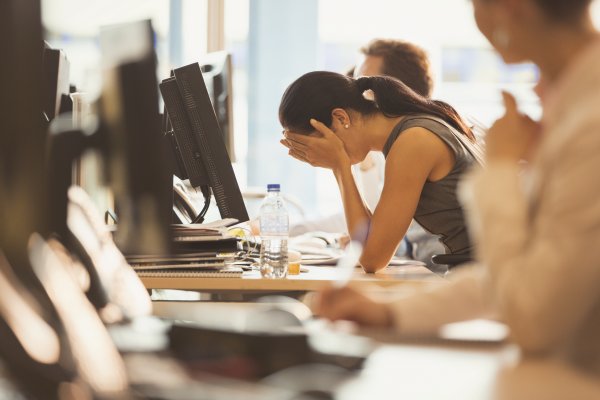 5 Ways to Keep Your Cool in Stressful Work Situations
Next Up: Editor's Pick