'We Have to Support These People.' Malala Yousafzai Visits Iraq to Meet Girls Who Lived Under ISIS

Only a few days ago, Malala Yousafzai was finishing her final high school exams. On Tuesday, she landed in Iraq to meet with displaced girls here who have spent years out of school. This is not how most young people spend the summer before college, but Yousafzai has become a champion of education rights for girls since the Taliban tried to kill her in 2012 in Pakistan.

“I want to ensure that there are more girls that can speak up and stand with me, because there’s nothing special in me…[I don’t] have some kind of special ability or talent,” Yousafzai said in an interview with TIME in the Hassan Shami camp for internally displaced people, just outside the newly liberated city of Mosul. “We need to encourage girls that their voice matters. I think there are hundreds and thousands of Malalas out there.”

Yousafzai is visiting Iraq as part of her ‘Girl Power Trip’, aiming to raise awareness about the importance of girls’ education, in particular visiting areas affected by poverty and conflict. “We were living in the same situation,” Yousafzai tells a dozen Iraqi schoolgirls seated at metal desks. “We were displaced in the Swat Valley [in Pakistan] for three months because of terrorism and extremism.”

Most of these girls lived under ISIS for almost three years and only escaped Mosul as Iraqi forces took their neighborhoods in the spring. Many like, Nayir, the 13-year-old from western Mosul accompanying Yousafzai on her visit, stopped attending school in 2015. “The first year ISIS was there I stayed in school,” says Nayir, whose name has been changed to protect her identity. “But then, the second year, ISIS changed the curriculum.”

Teachers in Mosul describe how the militants showed up at schools with new books. The math lessons used bullets instead of apples and Arabic lessons told inspirational stories of young suicide bombers. Parents were in a tough position—either send their children to school and risk having them indoctrinated by ISIS, or keep the home with no education at all. Like many parents, Nayir choose the later. For almost two years, she sat in the house.

“Before ISIS, I lead a normal life. I went to school. I went out with my sister and my friends,” says Niyir. “We couldn’t do anything under ISIS.”

Nayir’s family fled Mosul in April, after ISIS killed her father and blew up their home. Now they live in the Hassan Shami camp and Nayir attends class with other Iraqi girls. In some way, the girls attending class in this tent, in the 40-degree heat, are the lucky ones. The United Nations children’s organization, UNICEF, says 3.5 million children are missing out on education in Iraq, putting them at increased risk of child labor, recruitment into armed groups and early marriage, particularly for girls.

“Some families prefer their daughters to get married earlier, because there’s burden on the family,” said Yousafzai. Some displaced families, across the region, marry-off their daughters, simply because they are unable to feed and support them. “[We need to] ensure that this message is sent to refugee families [..] that education is important for their daughters.”

Yousafzai also says the international community needs to increase financial support for education for displaced children. “They would say that these families are going to return [home] anyway, so let’s not invest in infrastructure. There are no schools,” Yousafzai said, giving the example of Syrian refugee children, many of whom have not been to school since they fled the country more than five years ago. “People often forget that this is the way that the refugee children can have a future, that you educate them, otherwise it is a generation lost. If you don’t educate these children, then it is very challenging for the country to rebuild.”

Yousafzai, hasn’t been able to return to her country, Pakistan, since she was flown to the U.K. for emergency medical treatment after the 2012 attack. Instead she’s been finishing high school in the British city of Birmingham. While she tours Iraq, she’s waiting for the results of the her A-Level exams — the equivalent of the U.S. SATs — and to find out if she’ll get into Oxford University. It’s been tough for the youngest-ever Nobel Prize laureate to balance her advocacy work with the normal concerns for a new high school graduate.

“It has been challenging, because I was getting my own education. I had to go to school. I had to do my homework. I had exams. I had teachers,” she told TIME. “And then, I come out of school and then there’s another life, where you have lots of things to do.”

Yousafzai turned 20 years old on Tuesday. In the almost five years since the attack she has gone from a child victim of the extremism, to one of the world’s best known activists. “I wanted to change the world when I was 11. I wanted to be the prime minister of Pakistan and fix everything,” she said. “And I still believe in change. I still believe that through your contributions, raising your voice, you can bring change in your community.” 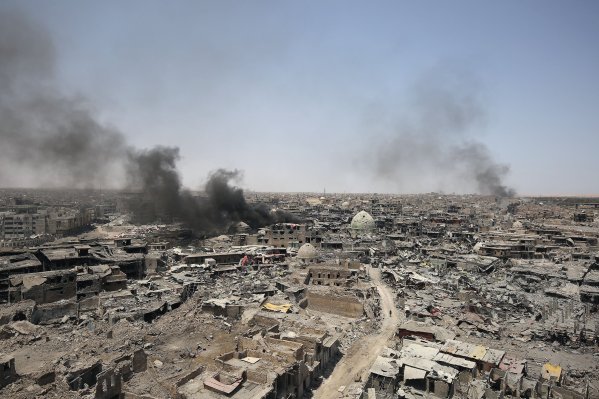 Mosul Faces Difficult Path to Rebuild After ISIS
Next Up: Editor's Pick